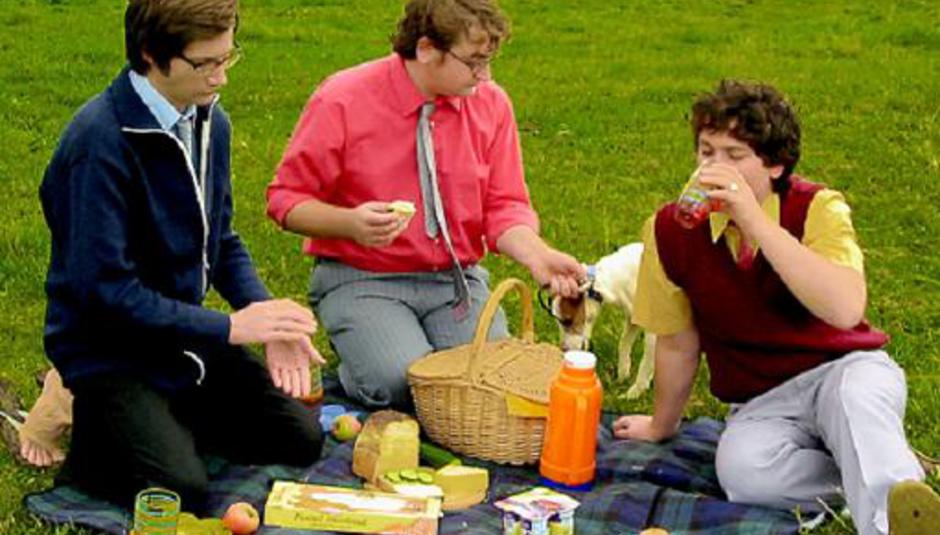 “We’re not very good at these” are the words which begin a face-to-face with Oxford three-piece The Young Knives. “I like the ones where people just email you questions so you have a bit of time to think about it. I just hate people!” claims guitarist and lead singer Henry Dartnell.

You wouldn’t know it from speaking with the band however, who are always open, honest and absurdly hilarious. Over the course of an hour, discussion leaps from questioning if Parkinson has sold out since moving to ITV, whether performing on The Friday Night Project turns bands into performing monkeys and if beige is a funny colour. It turns out that the answer to all of these points is a definite yes.

Henry handles most of the rambling and is joined by his brother, (and the fantastically named), bassist/vocalist The House Of Lords and drummer/vocalist Oliver Askew. Henry resembles a young Jethro (albeit without the contray aaarkcent) and there is a dark humour to their songs of escaping the mind-numbing, number-crunching, slumber-inducing modern Office World we live in. Henry: “There’s a lot of misery about Englishness. So many kids have to go into boring jobs with big firms. It’s different from the 70s when there was massive unemployment which bought about punk. It’s boring now.”

The Young Knives have picked up on this disillusionment perfectly in next release ‘Weekends and Bleakdays’ which sounds like Hot Hot Heat, fronted by Brett Anderson re-incarnated as a yelping puppy. “Hot summer, what a bummer, me oh my, think I’m gonna, pull a sickie, do a runner”, goes the first lines and perhaps it is the slave trade of a Big Faceless Corp. which is stimulating today’s best music. Drugs and groupies are so passé – need bands really should try writing about staplers and photocopiers!

Henry: “Office jobs are an inspiration for our songs. We use it to our advantage, because it’s all a bit of a joke really. There’s a bit of healthy anger and management speech in the songs. Sort of like The Office, but we were there first!” Oliver: (Singing) “Switched on the computer, check for Eee-mails!”

Thankfully there are no songs in their DrownedinSound gig tonight which contain these lyrics but there are plenty of jerky, danceable songs which are as tight as Gordon Brown’s 2006 Budget. Henry: “We did a couple of gigs for DiS a couple of years ago. Our profile page has been exactly the same since that point! It feels like a long time ago now and we’re sort of having our second wind now.”

Why the band has only just started receiving media attention is a mystery, as their mini-album ‘The Young Knives Are Dead’ from 2002 was creating frenzied art-punk rapped in English despair while Maximo Park and The Futureheads were still in nappies.

Oliver claims they have always been: “Notoriously bad at promoting ourselves.” Henry: “That’s why we died off. We didn’t have the balls really because we’re a bit modest. We never rang people up and said: “We’re really good, put us on.” You’ve got to believe you can do it otherwise there’s no point. But then again I guess even the shit bands think they can do it!”

Perhaps it’s time to join the Johnny Borrell types by telling everyone they’re The World’s Greatest Band™? Henry: “I think secretly we know that we are! It’s not a surprise that people are liking us know. We carried on writing even when we weren’t doing gigs and people hearing it would say it was really good.”

One person who felt this was Andy Gill of Gang Of Four who was sent the band’s music, (Henry: “Because we wanted either him or Brian Eno”), and immediately rang back to sort out producing duties. Henry: “He did all the Gang of Four records and the first Red Hot Chilli Peppers album. He’s produced some utter shit as well, but he has also done some great stuff!”

The first fruits of this relationship is thankfully not utter shit, but the utterly brilliant ‘Junky Music Makes My Heart Beat Faster’ EP which will be released it will get ventricle chambers pumping, although it will probably do even better if the band use The House Of Lords idea to “offer a free trumpet with the CD and then the last part you play yourself!” A Club NME tour in May with Special Needs is also likely to increase media attention, although the band is aware of the consequences of sleeping with the en.em.y.

Henry: “You have to make sure you don’t compromise yourself. But then you also have managers who are doing everything they can to compromise you, because it’s their job. I’m not sure if we’re a girl’s band though. I could try growing a Bloc-head haircut. The House of Lords tried it but he just looked like a twat – a fat Interpol!”

There is a banter and togetherness between the band, (Henry: “When Oliver isn’t there, I feel naked. When he is there, I’m definitely naked!”), which has clearly developed over many years. Oliver: “We’ve always been in a band together since the age of fifteen.”

Henry: “We moved to Oxford about five years ago. We were originally called Ponyclub because we used to live near the posh, with mothers shouting a small fat girls on horses. “Go on Matilda! Fucking beat her. Ra!” There was another Pony Club already so we let him have it coz we thought it was shit name!”

The House of Lords: “Young Knives came from a Scottish history book with an illustration of three men stabbing a posh man on a horse which seemed relevant. It actually said young knaves, but I misread it.”

Henry: “We introduced knives into the set and someone got killed. We were originally a four piece!”

Oliver: “We did actually give out spoons to everyone once though, but everyone started banging and it put me off my drumming.”

Henry: “Plus you should never give your audience weapons!”

Of course it would have been absurd not to enquire why the bassist is called The House Of Lords. Apparently it’s because the other two band members will come up with ideas only to have them rejected by the returning bassist. (Obviously!)

Henry: “Basically we could either all sit around talking to journalists saying we sound like this and that, or we could just say “our bassist is called the House of Lords!””

This they do but thankfully the band don’t need any sort of gimmicks and although they may claim to being “not very good at these”, The Young Knives are as engaging as their cutting edge, sharp, jagged sound.