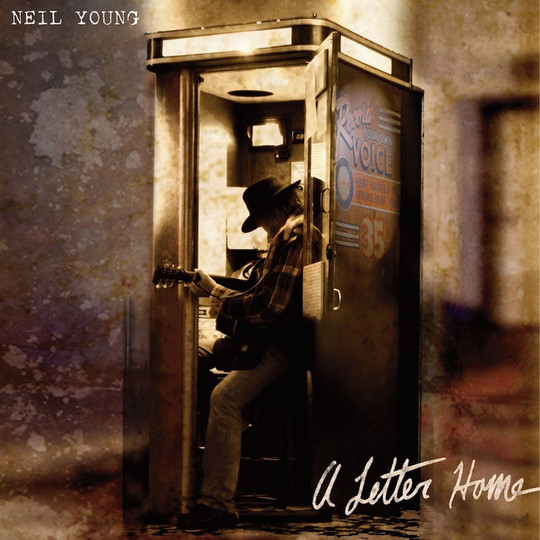 To say my eyebrows were raised to the point of nearly flying straight off my skull and embedding directly into the ceiling of the 87 bus upon first listening to A Letter Home would barely be an understatement.

There's been an onslaught of anti-mp3 propaganda that’s been spewing from the Neil Young camp of late - adorning the pages of his 2012 autobiography, Waging Heavy Peace, spilling over into the lyrics on Psychedelic Pill that same year (“don’t want my mp3”), and quite literally kickstarting his Pono project with over $6 million raised via crowdfunding. So recording his next solo album on a vintage Voice-O-Graph machine from 1947 with similar sonic capabaiities to a couple of baked bean tins linked by string, was the very last thing we expected. That having been said, the 40 years of Neil Young’s post-’Ditch-Trilogy’ career has essentially been one long series of non-sequiturs, only rooted by the knowledge that the irregular presence of Crazy Horse guarantee the man at his very best. However, expecting the unexpected from an artist doesn’t necessarily justify almost insultingly presenting an album’s worth of evidence that opposes an argument into which you’ve persuaded the public to invest more than $6 million - and on first listen A Letter Home feels precisely so. Behind the heavy, whirring, grinding vintage sounds of contradiction though, A Letter Home is quite simply an unaccompanied album of acoustic covers, and is thus Young returning to his most intimately heartfelt - the childlike cousin to Le Noise’s very grown-up electrified viscera.

A Letter Home opens with a piece of pure theatre, with Young getting into character as the wandering post-war troubadour, reading aloud a note directed to his late mother Rassy:

“Hi Mom! Hey, It’s great to be able to talk to you...my friend Jack has got this box that I can talk to you from...I think you should start talking to Daddy again. And since you’re both there together there’s no reason not to talk.”

The ensuing selection of tunes span some 30 years, the earliest being Ivory Joe Hunter’s R&B classic ‘Since I Met You Baby’ first released in 1956, and the latest 'My Hometown', Bruce Springsteen’s bittersweet ballad to New Jersey from 1984’s Born in the U.S.A.. The set opens with perhaps its weakest trio of tunes, three classics of the Sixties folk revival. Phil Ochs’ ‘Changes’, Dylan’s ‘Girl from the North Country’ and Bert Jansch’s ‘Needle of Death’ (surely one of the most heartbreaking songs ever written) all suffer from Young’s sloppy reimagining. The original depth and wisdom of ‘Changes’ quite simply doesn’t suit Young’s thin and fragile voice, while he rushes through ‘Girl from the North Country’ (a song that became exponentially more powerful the slower Dylan played it), and he can’t quite manoeuvre the awkward phrasings Jansch’s breathtaking refrain. The importance of the songs to Neil Young’s career are without a doubt - ‘Needle of Death’ was famously the source of inspiration for ‘Needle and the Damage Done’ - but it’s no revelation, and the delivery ultimately falls flat. Hereafter though, the song selection - and Young’s performances - greatly improve.

In general, the songs that began life as full band, large productions numbers undergo Young’s intimate reimagining far better than the already bare-boned tunes. Willie Nelson’s ‘Crazy’ morphs into a toned down fireside lament delivered so beautifully one can almost smell the burning coals. It’s tough to hear ‘Crazy’ without imagining it coming out of a car radio as the young Neil cruised down to LA in the mid-Sixties, off to help create country-rock with Buffalo Springfield and Harvest. Elsewhere, Tim Hardin’s ‘Reason to Believe’, recontextualized in a classically simple arrangement for piano by Young, sounds every bit the ancestor to Young’s own piano tunes such as ‘Birds’, ‘L.A.’, and ‘Journey Through the Past’.

The two tunes from Gordon Lightfoot are also definite high points. Firstly, the only other Canadian songwriter to rival Neil Young, Leonard Cohen and Joni Mitchell in terms of sheer power is a joy to hear, but furthermore, his tunes take on a downbeat tone of honesty when reconstituted as travelling folk tales rather than the grandeur of their original, widescreen pop incarnations. Plain, simple and formulaic as they may be, Young’s performances of both ‘Early Morning Rain’ and the tender ‘If You Could Read My Mind’ remove all the sugar coating from Lightfoot’s (nonetheless excellent) originals, truly revelling in the course sound of the Voice-o-Graph. The recording distorts and warps wildly on ‘If You Could Read My Mind’, yet it doesn’t detract, blur or muddy the performance in the slightest - perhaps even adding to it.

On The Tonight Show, Jimmy Fallon asked Neil Young why he picked these singers and their songs for the album. 'All of them could just play their own instruments and sing by themselves and just deliver a song, that was something that made a big difference to me when I was younger,' came the reply. On A Letter Home, it’s questionable as to what extent Young fully ‘delivers’ some of the tunes, but largely the collection makes for a great listen, and an even better lesson. Young’s fans learn a little more about the man’s listening habits and inspirations, while some listeners will perhaps get switched on to investigate the lesser known catalogues of Bert Jansch or Gordon Lightfoot. Most vitally though, perhaps Neil Young’s going to listen back and remember “delivering a song” is about more than bit-rates, or some mythical aural verisimilitude that Pono’s going to reclaim.

It’s worth noting that the album is coming out on heavyweight 180g vinyl, preserving the scratchy mechanics and vintage sound of the Voice-o-Graph in HD. Be it a bad joke, a big mistake or simply wild misjudgement the truth remains: no matter the quality, good songs sung well always win the day.