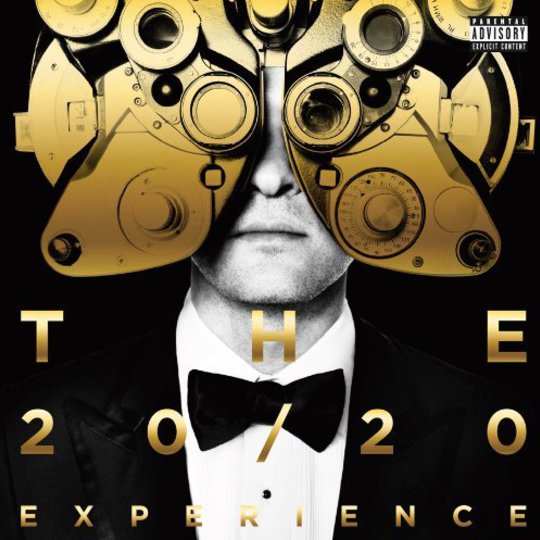 A great deal of how you feel about Justin Timberlake’s new album will depend on how you felt about his last one, and, crucially, where you stand on the notion of cutting room floor scraps being presented as fresh and exciting material. This is nothing new. You only need look to Green Day's recent ego-massaging trilogy of albums for an example of spectacular hubris in action.

The double (or triple) album - whether unleashed all at once or staggered out - is extremely tough to pull off. It requires tremendous skill and a sizeable amount of charm. Timberlake is in possession of both, as evidenced by previous heights (a strong argument could be made for 'My Love' as finest pop song of the last ten years) and the first part of his latest grand vision. Volume one of The 20/20 Experience may not be revolutionary and it's definitely self-indulgent but Timberlake makes everything click. His passion and confidence shine through what is essentially a vanity project. It helps that the songs - though often unnecessarily long - are expertly crafted, hugely polished and, well, just plain good old-fashioned fun. It's also admirable that Timberlake gives a shit about the narrative. 20/20 is far from his best work, but you believe he set out to make an album, one that moves from A to B with specific purpose. It brims with style, but there is substance.

When it comes to the epic conclusion of this venture, the decline cannot be understated. At first, as 'Gimme What I Don't Know (I Want)' moves from haze into funk swagger, it seems like he's nailed it. To treat The 20/20 Experience as one distinct piece (as JT evidently wants us to), it must be recognised that the opening 10 seconds mark a note-perfect transition from the pensive near-gloom of 'Blue Ocean Floor' into more nightclub-friendly environs. Where part one saw Timberlake flirt with a host of styles and only sparingly call on Timbaland's influence, 2 of 2 is much more in keeping with the producer's habits.

Enter the familiar-sounding 'True Blood', which peaks early yet feels the need to keep going, no real direction in sight, for nine-and-a-half minutes. 'Cabaret', though only half the length, feels just as navel-gazing, mostly thanks to a typically braggadocios appearance from Drake and mechanical input from Timbaland. Ditto 'TKO', a lazy effort that continues the phoned-in, overlong vibe. 'Take Back The Night' is game enough but registers as little more than a flashing neon tribute to Michael Jackson. And no album of sleepwalking would be complete without a pedestrian verse from Jay-Z. His guest spot on the flat 'Murder' is a step up from 'Suit & Tie' and his amazingly weak contribution to previous JT collaboration 'Holy Grail' (opening track of his own record, no less) but it's just the same tired shit he's been spitting in recent years when 'ft.' goes next to his name.

2 of 2, then, is an incredibly frustrating experience. It shouldn't be. Timberlake is better than C and D-grade material. A track like 'Drink You Away' with its faux-blues singalong chorus - "I can't drink you away, I've tried Jack, I've tried Jim, I've tried all of their friends" - and downright lame musings - Now tell me baby, don't they make a medicine for heartbreak?" - doesn't belong anywhere near a tight, considered major release from a genuinely savvy pop writer. Nor the simpering 'You Got It On' , the whining 'Amnesia' or initial closer 'Not A Bad Thing', all sun-kissed and forced smiles, the kind of thing 'N Sync might tack on as a 'bonus' for a greatest hits release.

And then, it's mercifully over, only… wait, no. Hidden track 'Pair of Wings' steals in following some silence, unleashing the dreaded Big Acoustic Number. There's no two ways about this; it is an astonishingly bad song, and one hell of a questionable way to close out an especially questionable record. Saccharine to the point where it becomes uncomfortable (right around when JT softly coos about how he will scoop up his lady love and "fly away on a big 'ol pair of wings" against the most withering guitar line you'll endure for hopefully many a year), it trundles along, aimlessly, begging for someone to pull the plug. Try not to imagine this mess accompanying a cheap Pixar knock-off in which Timberlake voices an ill-treated cartoon dragon, chained up and pining for the princess. It's impossible.

To commit fully to the spirit in which this was cobbled together; 2 of 2 is less music you can see and more music you can see behind - and what lurks past the curtain is concerning. The 20/20 Experience as a whole is 100 per cent the product of a multi-talented artist seeing clearly. The finish is dazzling, but damned if it ain't hollow.