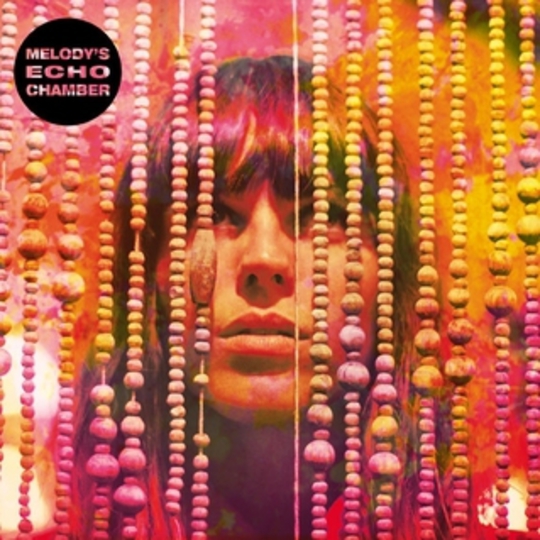 The name Melody Prochet might not mean a great deal to anyone outside of her native Paris. Having spent 12 years studying classical music it wasn't until the age of 19 that Prochet discovered avant garde pop and psychedelia. Brief but ultimately fruitless spells fronting the relatively unknown Narcoleptic Dancers and My Bee's Garden followed suit. It was during a spate of shows with the latter supporting Tame Impala that Prochet first encountered Kevin Parker, and after handing him a demo of her previous band's recordings, the relationship blossomed both in and out of the studio.

Now, with what is essentially a solo project (although some of her former bandmates in My Bee's Garden remain as part of the live set-up), Melody's Echo Chamber has arrived in all its multi-colored dreamscaped glory. Comprising 11 individual pieces of music in total, it's difficult to describe every single aspect of Melody's Echo Chamber as a song, particularly when confonted with dreamy interludes such as the carousel-veering-out-of-control playfulness of 'IsThatWhatYouSaid'. What is quite stunning about this record is that none of these compositions were originally intended to sound as they do here. None of Prochet's original recordings have made it onto the internet yet – a rare achievement in the current climate – but while the prospect of hearing Melody's Echo Chamber in its embryonic state may spoil the spectral elegance of the record somewhat, it would be interesting to hear just what impact Parker has had on deconstructing and rebuilding each segment.

Indeed without meaning to overly dwell on his contribution to the album, there can be little argument in declaring Parker's methods as being slightly akin to those of a certain Kevin Shields. As with his own band's Lonerism, Parker has welded elements of the past onto Prochet's ethereal musings to create something altogether otherworldly. Sure, the doubters may point to this as being just another pre-packaged delivery off the shoegaze revival bandwagon. And while there are comparisons to be made with artists of that genre both old and new, Melody's Echo Chamber has much more to offer than being a mere revisionist exercise for people still mourning the demise of 1991.

While there's a blissful air of ambivalence omnipresent throughout much of Melody's Echo Chamber, there's also a distinct feeling this album isn't exactly the perfect accompaniment to a world where sweetness and light coexist with buttercups and daisies either. Take opener 'I Follow You' for example, Prochet's swooning vocal performance instantly drawing parallels with Liz Fraser or Rachel Goswell from back in the day. However, beneath its sugar-coated sheen lies an inherent sadness, most notably when Prochet coos a rueful "I was hoping you might come" before the song draws its last breath.

Similarly on the more upbeat 'Crystallized', which transgresses the space between late Eighties indiepop and the affluent, cinematic ambience of Stereolab or Dubstar even, Prochet's whispered "You are gone for real this time" suggests much of Melody's Echo Chamber may have been written in a less than great place. Whether or not it's correct to pinpoint Kevin Parker as her knight in shining armour is open to debate, but the melancholic tone of her lyrics coupled with his ingenious studio wizardry has produced extraordinary results all the same.

Delving deeper into its confines and there's traces of Sixties kitsch not a million miles away from the much-lamented Broadcast ('You Won't Be Missing That Part Of Me', 'Some Time Alone, Alone'), the former even marrying a touch of Loveless-style reverb tracking onto its outro. Prochet's use of samples, particularly where the some of the rhythm sections are concerned also makes for interesting listening. Not least because on at least two occasions it's almost like being transported back to 1990 where James Brown's 'Funky Drummer' seemingly underpinned anything and everything. However, such a simple, repetitive beat only serves to enhance the likes of 'Snowcapped Andes Crash' and 'Bisou Magique' here. 'Mount Hopeless' too embarks down the same path, albeit incandescently like a finer tuned, experimentally diligent Beach House.

Elsewhere, 'Quand Vas Tu Rentrer?' takes Prochet's voice on a multi-dimensional journey akin to Laurie Anderson's on her 1981 single 'O Superman', while the distinctive tones of lead single 'Endless Shore' straddle the similarly electronic yet decidedly different territories of Kraftwerk and M83 with salient grace. By the time 'Be Proud Of Your Kids' brings the record to a close, its happy-go-lucky charm brought to life by the sound of a child laughing uncontrollably, there's an unerring sense of closure in Melody Prochet's intentions with this record, yet also a distinct reminder that the future possibilities for her and Melody's Echo Chamber are endless.

Whatever happens next, she can rest assured safe in the knowledge that together with her beau they've conjured up one of 2012's - or any other year in recent memory - finest debuts. Bravo!