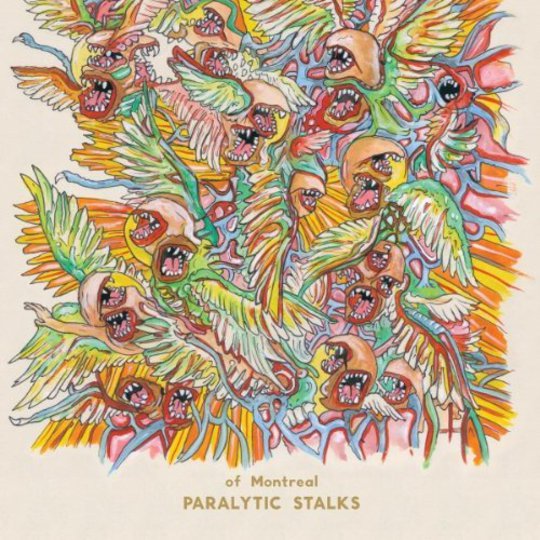 Let’s just dive in and say what the biggest problem with Of Montreal’s eleventh album is: it’s a fucking awful eight minute song/sound collage/thing called ‘Exorcismic Breeding Knife’. A pallid, claustrophobic, atonal eight minute crawl of detuned strings, found sounds, daft FX and Kevin Barnes’s listless muttering, it vaguely conjures the sensation of lying down ill in a darkened room, shivering violently, while being irritated by the snatches of sounds of people having fun outside. That may actually be the sensation it’s meant to conjure, given the defeated tone of many of Paralytic Stalk’s lyrics. But y’know – excuse it as an art experiment by all means, but it’d be genuinely more pleasant if in lieu of the song the record simply thwacked you in the crotch. And though it’s conceivable that the unpleasantness of ‘EBK’ queers the pitch for 13-minute album closer ‘Authentic Pyrrhic Remission’, I suspect it might just be that’s it’s not that great, a herky jerky mix of beat-y song fragments that recalls a bloodless Skeletal Lamping, shorn of its hardness, hard on and sense of spiralling madness. Certainly these two tracks offer a lot of ammunition for those who suggest Barnes' muse has been locked in a deteriorating spiral of self-indulgence since 2007.

That said, if those two songs take up 20 minutes of Paralytic Stalks, they’re still the last 20 minutes, and perfectly ignorable. Cut your losses with the ending and give the rest of the record a bit of time, it’s actually a pretty rewarding experience that sees Barnes’ band shapeshift yet again. The synths, drum machines, Prince obsession and horndog lyrics have been largely shelved. In are lengthy, vaguely musical theatre-ish songs that reference previous Of Montreal musical styles while being based around pastoral whorls of woodwind and strings, spiked with savagely bitter lyrics.

Typically striking opener ‘Gelid Ascent’ throws a musical curveball, a weighty, violent (“you speak to me, like the anguish of a child doused in flames”), proggy space rock detonation that ripples out in thick fuzzy waves. Following its detonation – or at least until the rude interruption of ‘Exorcismic Breeding Knife’ - Paralytic Stalks settles into something like its stride, a rich, organic musical tapestry, of which 'We Will Commit Wolf Murder' and 'Ye, Renew the Plaintiff' are the twin peaks. The first song perfects the subversive showtune schtick with a lilting, comfortable cushion of melody that's ominously spiked with the repeated, tossed off refrain "there's blood in my hair". Those words are reconstituted to gut wrenching effect in a gaspingly dissonant outro that ends in a single, desperately croaked "fuck". 'Ye, Renew the Plaintiff' is altogether less timid, its muted, meandering into seemingly there to provide thrilling contrast to the screeching arcs of guitar that cut into it around a minute in, soaring high like spiralling mania as brass rises urgently and Barnes agitatedly buzzes "Oh Nina, how can I defend myself against this world?".

Both of these songs - like much of the record - seem concerned with Barnes' attempting to grapple with his own overwhelming sense of misanthropy. In fact, as the references to his wife Nina attest, the entire album feels like an attempt to unburden himself to her: ‘Ye, Renew the Plaintiff’ makes it explicit by naming her (“Oh Nina, I have become so hateful”), but clearly she’s also ‘…Wolf Murder’s “the only beauty I don’t want to strangle”, the “one I love” who he makes cry on the jauntily frazzled ‘Spiteful Intervention’, possibly even the person he’s addressing on the Young Americans-y orchestral soul pop of ‘Dour Percentage’ when he declares “it cheapens us the way you and I torment each other”. Elsewhere it’s a straighter up snarl fest: “Somehow I lost the thread of being human, wrapped in all this bitterness” he sighs gently on the delicately schitzo ‘Wintered Debts’; “you are what parasites evolved from… an irrelevant effect, unavoidable, but of low influence” he babbles in ‘Gelid Ascent’s chaotic early phase.

Setting aside the unpleasant ending, I suppose my biggest probelm with all this is that somewhere in the stream of consciousness angst, Barnes the confessor has to some extent overridden Barnes the songwriter. His great angsty epics of times previous, ‘The Past is a Grotesque Animal’ and ‘No Conclusion’, may have respectively been about the breakdown of his marriage and his subsequent thoughts of suicide, but they were exquisitely performative pieces, written firmly with an eye on the general listener. Even Skeletal Lamping’s priapic chaos was precision tooled for provocative impact. By contrast the lengthy songs on Paralytic Stalks stretch out in a flowingly pretty sprawl that’s never as arrestingly out there, ruthlessly catchy or perfectly controlled as the band's most incandescently emotional work. And it’s certainly Barnes’ least poised vocal performance in an age: his squeaking and spitting and chirruping and fluting often distracts from the caustic sentiment of the song. Certainly it’s an approach that undermines any sense of cathartic release the upbeat ‘Authentic Pyrrhic Remission’ may have been intended to impart.

Despite its heart of darkness, Paralytic Stalks is a deceptively gentle, rambling record that gains integrity but loses focus via the strong suspicion that it was recorded more for the benefit of Nina Barnes than for us. But it’s too honest, too inventive, too eloquent and too affecting to be the descent into total self-parody one half fears might come from a new Of Montreal release. It does absolutely nothing to alay the fear that day will come; but that tension is half the fun with this band.