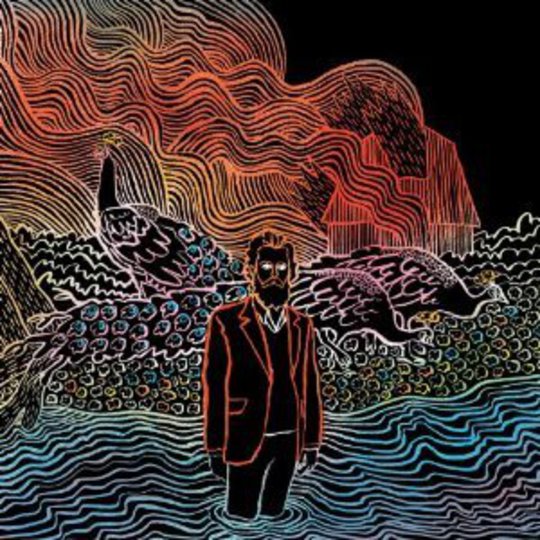 Although expressions like ‘fully realised’ get bandied around a lot in the world of music criticism, it’s fair to say that Iron & Wine’s previous album The Shepherd’s Dog (2007) fit this description to a tee. Sam Beam’s third full-length was a sonic leap forward from the acoustic bent of his earlier work, but a natural, organic progression all the same. While Our Endless Numbered Days polished and refined the sound he originated on The Creek Drank the Cradle, his collaboration with Calexico and the excellent Woman King EP pointed towards the more expansive full-band sound that came to fruition on The Shepherd’s Dog, a new aesthetic that flourished for two main reasons. First, from the very beginning, Beam’s adept finger-picking style exhibited strong percussive elements, and secondly – as this is starting to sound a little clinical right here – the man writes such lucid, beautiful songs.

Kiss Each Other Clean, then, follows the template set by The Shepherd’s Dog and embellishes it with blasts of wild sax supplied by Antibalas’ Stuart Bogie. Beam’s straight-up music fandom is exploited to the full: African and Latin-influenced rhythms meld onto jazzy structures while rich arrangements are bolstered by washes of synth, sweeping harmonies and occasional jolts of deep low end. It’s a credit to the vision of Beam and longtime producer Brian Deck that it holds together so well.

Although touted by Beam as a focused and implicitly more straightforward record than The Shepherd’s Dog – a return to “early-to-mid seventies FM, radio-friendly music” – at its best Kiss Each Other Clean is a coruscating, adventurous work that rewards (but doesn’t demand) close, careful listening. It might seem, for example, that on certain songs Beam is focusing on texture and rhythm to the detriment of lyrics or melody. Put some headphones on and dim the lights: he’s really not.

Many long-standing Iron & Wine predilections are present and correct, like the considered imagery relayed in his soft, sweet vocals (on the hushed ‘Godless Brother in Love’ he’s never sounded better). ‘Walking Far From Home’ is a superb opener that resonates with all the carefully wrought lyricism of songs like his opus ‘The Trapeze Swinger’. A cascade of stirring vignettes wrapped up as a travelogue that piles on the tension only for the bottom to fall out at precisely three minutes seven seconds, I’m sure there was something in the press release (which I’ve now lost) likening it to the vivid prose of Cormac McCarthy. It’s a notion that lines like “Saw a car crash in the country / Where the prayers run like weeds along the road” do reinforce, though Beam’s lyrics arguably pass on the author’s famed economy and paint swirling yet never fussy panoramas of human life.

Religion is a topic that has long coloured (the agnostic) Beam’s work, and Christianity makes its presence felt throughout, whether explicitly (such as on ‘Me and Lazarus’) or in passing reference. The sense of history and crumbling import it adds to proceedings chimes with the stately musicality on offer. Even when Beam isn’t referencing the Bible, a sense of solemn grace hangs over the record, such as on stunning centrepiece ‘Rabbit Will Run’. Here he casts himself a weary fugitive in a series of endlessly quotable lines against a canvas of marimbas, squalls of noise and a variety of vocal effects. ‘Tree by the River’ sees nostalgia get its dues, on a breezy tale of teenaged romance which hews closest to the kind of Seventies AOR Beam was keen to approximate here.

Beam’s talent as a lyricist is to do with suggestion above all else, his serene croon ensuring listeners’ attention. If there is one thing Kiss Each Other Clean does lack it’s a song as blessedly simple and compact as ‘Each Coming Night’ or ‘Resurrection Fern’, though ‘Glad Man Singing’, ‘Godless Brother in Love’ or even ‘Tree by the River’ make for broader, equally effective exercises in tranquility. Perhaps for the first time on an Iron & Wine LP, it is the sturdier tunes that are more striking, not least the dazzling closer ‘Your Fake Name Is Good Enough for Me’. A song in two parts bridged by stark electric guitar, a skronky, propulsive open eventually subsides into a progressive jam where Beam fires out contradicting couplets (“Become, the fruit and the Fall … The blossom and the wilt”) over an ever-swelling sea of discord. It’s invigorating stuff, dispelling any notions of fragility or rote prettiness that might persist around the Iron & Wine name.

Kiss Each Other Clean makes Sam Beam four for four – more if you count the EPs and 2009’s rarities set Around the Well. But more than being just another great album, it suggests a brilliant and unpredictable future from an artist who, unbelievably, appears to be only just getting started.