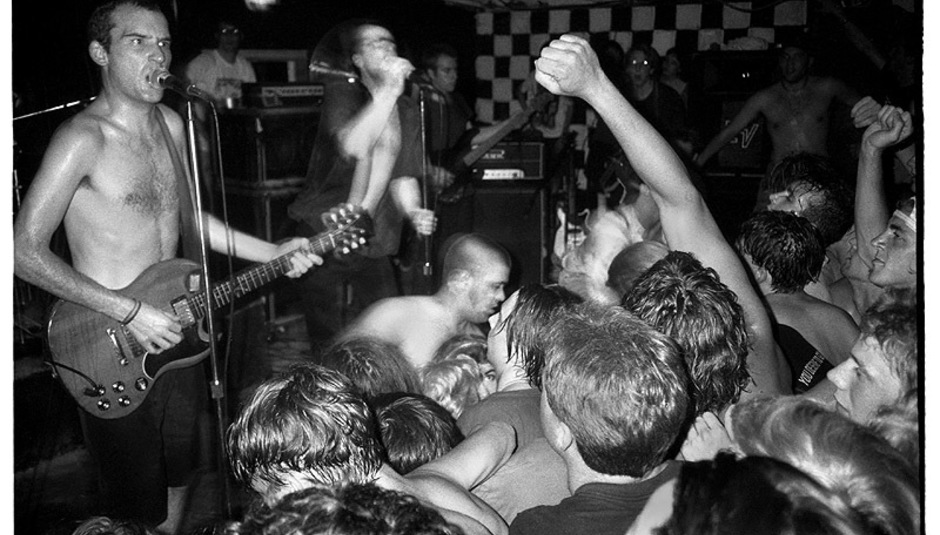 So, stage banter is a much underrated thing, right? Watching a band march through their set without the slightest mouthing of an unsung word to the audience can just take the edge off sometimes. Badness. Nobody wants to lose the edge. That's why super-awesome-cool people like Tom Waits release this sort of shit as parts of their record, as he did with Glitter & Doom. Some is priceless, sure.

Fugazi are another (much missed) bunch of brilliant exponents of this particular practice. Thanks to the people at Chunklet and James Burns, they've unearthed (sort of) and compiled a whole forty-fucking-minutes of stage chatting from the Ian MacKaye fronted band, and an interesting listen it is, too.

Inside the 40 minutes includes, these snippets, and much, much more, including something about a robot tuna. I dunno...

"Tonight we're going to be offering a number of selections from our vast category..."

"There was some jackass out there whilst they [all female support band] were playing, some incredibly major stupid fuck saying 'Why isn't there a man on stage' or some bullshit like that, as if a penis behind the guitar is going to right his world view. Well I'll tell you, when I see this bullshit like you apes pushing people around, jostling these people, it just makes me sick to my fucking stomach! You don't like it, take your five bucks and get the fuck out of here!"

"Somebody says that Fugazi doesn't rock. It's weird, because I don't know how the word got out, but you might be right...you said it? This is great...we could do this for an hour, what do you think? You and I are getting off to a bad start..."

Etc. There's A LOT. Click here to get the file. It'll be worth your downloading bandwidth, for CERTAIN.

Favourite part? Mine has to be at about 15 minutes.