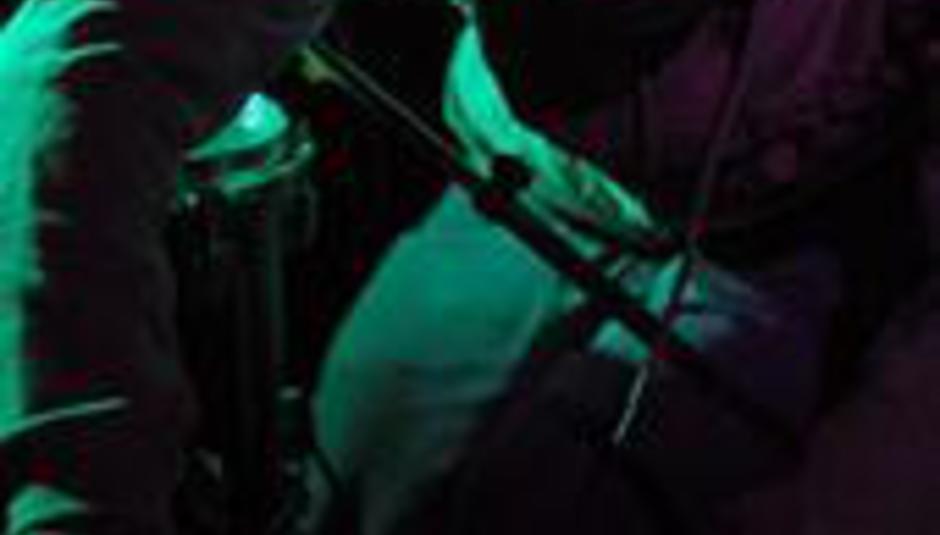 Team Brick is a powerful and unique musician from Bristol. His performances incorporate all kinds of instruments, equipment and techniques, including clarinet played through a loop pedal, drum abuse, chiming bells, plucked strings and a cappella rants. His vocals are similarly broad in range, encompassing throat singing, speaking in tongues and cathartic off-mic bellowing, activating the acoustic properties of his whole body. Together, these sounds create an evocative, resonant and mysterious body of work that offers a half-glimpse into an intriguing world of its own.

"Behold! I, the bell, do not speak of vain things!" he tells John Brainlove.

What's the first instrument you remember picking up?
The Yamaha keyboard my granddad gave me at the age of three or four. Though I had a toy sax around that time, too, and I can't remember what predates what though.

It's funny, in my imagination it was probably something like The Red Violin from that film where the violin maker paints it with his dead wife's blood; the violin that travels through the centuries, from collectors to gypsies and causes trouble wherever it goes... but that's not really a question is it. Erm... so have two:
a) have you ever owned a violin painted in blood? And…
b) I guess what I'm saying is that your music has deep resonances - does it have any attachment to some kind of hidden history?
a) I've never, I'm not fond of painted instruments; I like them to be their natural colour. And b) Perhaps 'morphic resonance' comes into it somewhere, though I can't be sure.

There definitely seems to be an element of channelling in your live performances, is that something you have developed intentionally?
As that's the first time I've been picked up on that, I gotta say I haven't noticed, and looking back, I can't ever remember what I've done afterwards, so I can't really consider it either...

So do you find performing quite an immersive, instinctive process? You must have some idea of what you're gonna do, you know, with the instruments and devices you bring along...
For the immersion aspect, it's quite dependent on the volume: if it's loud, most of my thoughts disappear, and I think that's why I can never remember my shows... I have a vague idea of what I'm going to do – I prepare some things rather than rehearse – but a lot of the things I use are borrowed or found on the night, and I have little idea of what's gonna be done with 'em.

I think that kind of fits with what I'm getting at - watching you live, I'm curious about where exactly the music is coming from. It seems so rich and resonant, and to hold so much weight... I'm curious about what informs you musically, your musical development; how you reached the point you're at now. Kind of from the first time you picked up an instrument, really. I guess phrased as a question that would be: can you recall significant moments from your musical life that have informed where you find yourself now?
Spending too much time in my bedroom as a teenager? I read a lot of crap about the ancient Greeks, Pythagoras in particular, music of the spheres and all that gubbins, ratio, 'alignment with the universe' and other hippy bullshit... I have to remain sceptical about even myself!

I don't know much about that stuff, could you explain it a bit? "Music of the spheres"...?
As far as I know and can understand, it's the idea that the orbits of our solar system's planets are of musical proportion, and are one huge piece of celestial music - on a non-hippy side of things, it kind of makes sense.

Maybe related to Tesla's "perception of the earth as a conductor of acoustic resonance", (as puzzled over by Jack 'n' Meg White in Jarmusch’s Coffee and Cigarettes)?
I don't know of Tesla, I'm still fairly new to this - might have something to do the resonant frequency of the planet? Somewhere 'tween 11-13hz...

It's funny, I'm going about interviewing all the most intriguing and fascinating bands I've come across on my travels lately, part of an ongoing effort to fight journalistic laziness, and the first band were talking along similar lines - Fuck Buttons. They were describing how they try to see themselves as conducting energy and sound that actually comes from elsewhere. I guess the question of whether music comes from people or through people is the tip of a philosophical iceberg.
Possibly? I guess on record, through. I like to keep the disciplines separate.

What did Pythagoras have to say about music? I only know him from his acclaimed triangle work.
It was Pythagoras who came across something like the 12 notes we know today (excluding the ongoing war between supporters of Just Intonation and those of Equal Temperament). He walked past a smithy's place and heard them hammering anvils, generating fourths, fifths and octaves. He got a bit of a hard-on and went home to look into it.

And "alignment of the universe”?
Something involving weighted strings (strings were of the same thickness and length, the variable factor was the weights involved) and an instrument called the monochord - by finding the fifth of each note using the hemiolic ratio (3:2), he kept going round until he came back to his first note - only when it came back, it was a little sharp - thus planting the seed that would start the war of Just Intonation / Equal Temperament. I could go on for fucking hours about that shit. ‘Alignment of the universe' - I'm a little embarrassed to use that term, but I mean - if the universe, as with everything in it, is ruled by number, as with music, the music we hear is of numbers relative to that which we cannot hear (i.e., the proportions of the orbits of the planets, cycles, seasons, growth, death, rise and fall etc...). So in my mind the music we make is like a ‘to scale’ model of the universe. Also I suppose that the opposite is possible too – it’s possibly attuned to microscopic things also. 'Just Intonation / Equal Temperament' - Nah, I'm not gonna 'go there' right now - I'm not confident enough on either subject to talk on them, though Equal Temperament is the common system for western music. Blah.

Okay. We should talk more about it sometime though, as it's really interesting. The ongoing arguments about the nature of what sound even consists of...
Sound consists of numbers.

Aren't numbers just a way for us to understand things? That seems reductive.
I don't believe so. The dimensions of a tangible object are ruled by numbers, and the same thing applies to sound. A sonorous sound has many 'dimensions' - it has its primary frequency, coupled with its harmonics, some more obvious than others... other factors include the size and shape of the room you're in and yadda yadda yadda AGH. I really can babble on about this cack for days, though not as lucidly as I would like. Are your performances largely improvised, then? I was curious about the speaking-in-tongues section. Put most people in front of a mic and they'll freeze up without structure, but you seem to thrive... I was surprised when you told me it was made up, I thought it was some kind of Jewish prayer.
Semi-improvised... a lot of the vocals are largely prosodic... though I do sing in English from time to time, and sometimes sing a couple of lines in Latin from a prayer I like.

What's the prayer?
I only remember the first two lines, which are: "En ego campana, Nunquam denuncio vana" - "Behold! I, the bell, do not speak of vain things!"

Do you speak other languages?
Pidgin German. A couple of phrases in badly pronounced Japanese.

Are you religious?
No.

Are you from a religious family?
Yep.

What faith?
The usual one!

Were their musical choices any good when you were a kid? My parents were all about the Abba and Bob Dylan.
On my mum's side I was raised on folk, English and foreign; my dad's side was mostly brass bands, but some good ‘60s pop bands like the Beach Boys.

Where do you position yourself in terms of what you do now, within contemporary music? Do you see much out there that you relate to, or feel affiliated with?
I dunno, y'know... not really?

What kind of bands do you tend to get put on with? Seen anyone you've liked?
Hell yeah! When I was younger, I played with a lot of dull indie shite... though recently the bills have been a bit more cohesive.

Best line-up you've been on?
Maybe in Leeds with Jeremy Smoking Jacket? I dunno, dude!

How's it all going at the minute? I hear you're touring and building up to some releases.
I've never toured as Team Brick before. I’m still recording an album for Invada, writing a 7" for Victory Garden, and sending things to labels all the time. I play the syntho for Crippled Black Phoenix.

How did that come about?
Justin saw me play a show and liked it... started talking to me about two or three weeks before the first tour, asking me if I could be a multitask guy... we only communicate via Morse Code and lewd scribbles on Post-Its, except for Dominic, who communicates via the medium of slap bass.

To which I would probably reply through the medium of punch. What's your album going to sound like?
A bee trying to get pollen from spinach. At the moment, just very long. Been doing actual pieces... instruments thus far: all the regular ones plus pedals, synth, argument, violin, cello, clarinet, Wurlitzer, Hammond, piano, Rhodes, CD rack, wine rack, accordion, trombone, voice... erm, I think that's it.

What do you think is important to your music that we haven't talked about yet?
I dunno. I don't understand my music myself...

You don't?
Not really - it doesn't make any sense to me why I do it. I can't elaborate.

Team Brick is pencilled in to play the following shows in the next couple of months:

Below: video for 'Alsation'