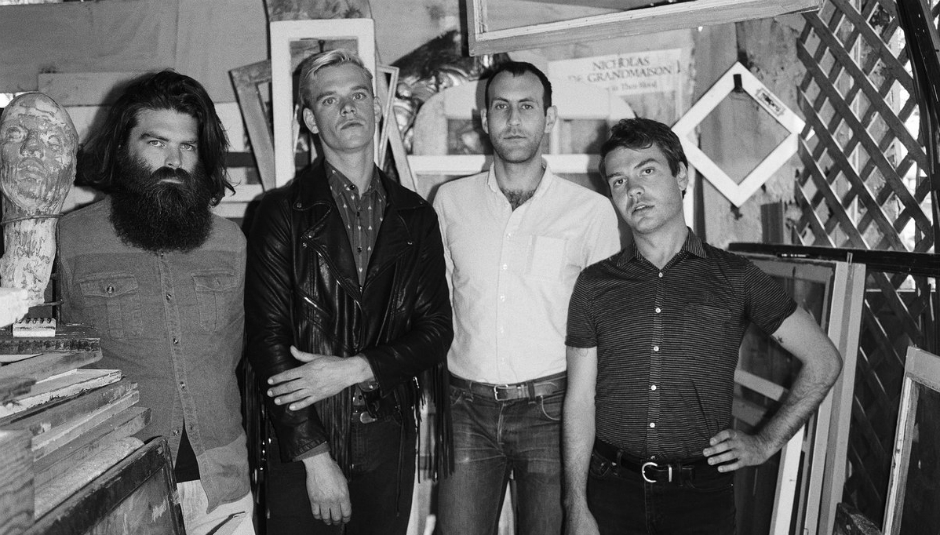 Preoccupations feverishly anticipated self-titled album released in September formed the perfect echo to the dystopian nature of 2016 right from the disaffected tones of opening track ‘Anxiety’. However, the record itself conversely marked a triumphant moment for the band as they cast off past aspersions to effortlessly evolve their apocalyptic post-punk.

Prior to its release, the band had been toiling under the weight of their original name Viet Cong. A Canadian website at the start of the year had even launched an online counter to chart the days since the band had said, in a somewhat prematurely issued press release, that they were changing their name. In their own personal lives, a sense of unease prevailed as members ended personal relationships and skipped out on their native town of Calgary to start afresh in new cities.

Out of this period of flux came a new name and nine tracks sequenced into a hypnotic 38 minutes. Recorded sporadically with Holy Fuck’s Graham Walsh, the album journeys identically between lacerating passion and cleansing ambience with devastating effect. Last month their London show at Oval Space was their tightest and most mesmorizing performances in the capital to date with the band, now flanked by an impactful light show, plunging the audience head first into their world. It’s obvious Preoccupations are a band in exquisite shape

Speaking to frontman Matt Flegel down the line from a pit-stop on of band’s tour, he talks about the gamble of changing the band’s name, how the record came together, and if the band would ever make the magic partnership of lending their atmospheric sounds to the big screen.

DiS: How was the show at Oval Space?

Matt Flegel: It was good. It was probably the biggest crowd we’ve played to in London. I thought it went really well considering I hadn’t slept the previous three days.

You know when you’re flying and your time gets all screwed up? One of those where I get back to the hotel and lie awake.

You seem to have invested a lot in the show - you now have a light show and as a band are much tighter.

Yeah, hopefully that’s how it seems. In our minds it’s never really, but it seemed to be a decent show for us. It’s the first time we’ve toured around with a lighting guy; we built two towers and stuff to be more of a show, more of a spectacle.

Your debut record Viet Cong was recorded in just five days, how did you record your latest album?

We were so busy last year we didn’t have time to do any writing. It’s hard to get any writing done on the road. I do a lot of just writing down random thoughts and words, but as far as getting to the studio and doing some writing we didn’t really have much time. Any time we did have off we’d book studios and go in there and tinker away and build things up from scratch.

That wasn’t the case for the self-titled Viet Cong record where we’d been playing those songs for a good part of a year leading up to that recording, so we just went in and recorded them more or less live. This was a little bit more of a process, we did about five or six different sessions fitting in ten days or twelve days at a time. We got together earlier this year and pieced together the record and that became the self-titled Preoccupations album.

You all previously lived together in Calgary, however a few of you have since moved to different cities. What prompted the move?

We’re spread across Canada. I’m in Montreal now, Danny [Christiansen, guitarist] is in Victoria on the other side of the country, Mike [Wallace, drums] in Toronto and Monty [Munro, guitarist] is the last one left in Calgary. That’s what happens when you’ve been on tour for two years living in a van together twenty-four seven. The tour ends and you’ve just got to split up.

I think everyone was just dreading the idea of going back to Calgary as when you’re touring around and seeing a lot of the world, coming back to Calgary looks very bleak. It’s where friends and family are, but culturally it’s pretty void.

This album, like the previous record, has a feeling of being in transit; I always listen to it when I’m travelling on a train. How was it influenced by being on tour for the last two years?

I think that’s probably a sub-conscious product of us constantly moving. I don’t know if this is how we necessarily put it together.

As a whole the album has a sense of urgency and desperation to it punctuated by periods of calm. Where do you think that comes from for you as a writer?

A lot of it is dealing with stuff, the bullshit of everyday life. Dealing with getting up every single morning and looking in the mirror and going: “Alright, I’m doing this”. I’m not necessarily a dark person and I think that’s because all the art I make and all the music that I write starts with that darkness. It keeps me more level headed and open.

Is it a form of self-therapy? Is it cathartic?

Absolutely, music has always done that for me. It’s why I’ve been doing it most of my adult life.

The album has a lighter feel than Viet Cong, and on tracks like ‘Memory’ it’s quite ambient. Was that from a change in your listening habits? What was that born out of?

I’m not sure if it’s all that different; it’s coming from the same place. I feel like this record sounds on first listen a little bit brighter than the last record, but when you dig into it’s no different if not darker.

Pretty much, I am usually writing things down if someone says something funny or I see something that sticks with me. It’s like an archive of nonsense with nonsense scraps of paper.

Is there anything you look back on and think: “What the hell was that?”

Most of it! 80% of it. Same with the voice memos, I’ll sift through my voice memos at the end of the tour and it’s me drunk at 2.30 in the morning humming something indecipherable. Sometimes it’s good though.

‘Fever’ reminds me of the soundtrack to the film Heathers. Would you ever consider getting into writing film soundtracks?

Absolutely. I’m working on a short film right now so hopefully that will work out. One of the albums I listen to the most that I own is the Vertigo soundtrack by Bernard Herrman. I love cinematic music, I love orchestral music, a lot of classical music and spacious sounds. That definitely comes through when it comes to putting ideas into one song.

Holy Fuck’s Graham Walsh, who produced your last record, also produced this record. Why did you choose to work with Graham again? Did you ever consider getting a different producer or self-producing?

A lot [of the music] we used was self-recorded, but we did a couple of chunks with Graham. We did two weeks at the barn where we recorded the last record, and nothing much came out of that session; over an hour’s worth of music and we only ended up using 10 minutes or so; bits of ‘Anxiety’ and a couple of chunks from ‘Memory’. A lot of it we did on our own in makeshift studios.

When we got together in January to mix it and piece the record together, we reached out to Graham. We redid some drums and stuff like that. We did a lot of writing in the studio, I guess.

Dan [Boeckner] from Wolf Parade provided guest vocals on ‘Memory’. Why did you choose to get him in?

It just randomly happened as we were in the studio recording that song and I kind of knew that I would want someone else’s voice at that point as a kind of like a breakthrough and it'd be feel-good. Dan was texting me saying: “Are you guys in town? Do you want to hang out?” I was like: “We’re in the studio come and sing on this song”…It was kind of a happenstance.

Would you ever collaborate with anyone else?

Yeah, absolutely we’ve talked about it. It’s hard with musicians who are already on successful projects because they’re constantly busy. We’ve actually talk to Dan and a couple of other buddies about doing something. Who knows? I don't know if I need another band right now.

Do you have a dream collaboration?

The album's lyrics draw on personal experiences as you’d all come out of long-term relationships at the same time. Are you concerned about making yourself vulnerable by sharing those experiences in your lyrics?

A couple of years ago I would have been maybe more self-conscious about it. As far as being under public scrutiny, we’re still self-deprecating all the time I’d say. We’re a little more confident with this one; I think that comes from playing 400 shows in front of people. People are still coming I guess.

This album has come off the back of you changing your name from Viet Cong to Preoccupations. Before you changed your name there was a website counting down the days since you’d said you’d change it and you still hadn’t. How did that feel at the time? Was it like an online witch-hunt?

I wasn’t giving it much thought. I was resigned to the fact right after we released the Viet Cong record that for the next record we were changing our name. I don’t know why it was announced. I think our manager at the time put out this thing behind our backs saying we were changing our name as he was dealing with a lot of bullshit. I guess I don’t blame him, but if it was up to me, I wouldn’t have put out a statement unless we actually had something to say.

When changing your name, you’ve got to some extent get people to know who you are all over again. What negative effects have there been?

I don't know, I get people coming up to me and saying: “Why did you change your name? The last one was cool?” I have to deal with that shit every single day. It’s annoying as you start to feel like assholes, but that’s about it. We’re playing to full rooms, so I don’t think we’ve lost fans because we’ve changed our name.

What have you got coming up?

"I have no opinion on what other peop...