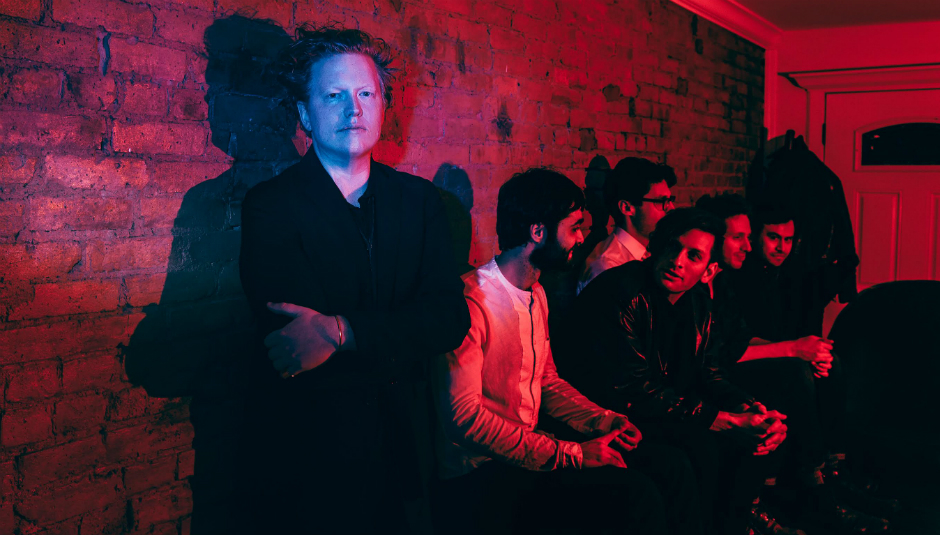 Finding articles that don’t talk about Dave Harrington’s earlier project with Nicolas Jaar is near impossible. But that doesn’t seem to irk him at all. Playing in Jaar’s live band, and then going on to write and perform as Darkside, was just another step in Harrington’s complex, sundry career. The New York, avant-garde, madshit guitarist, jazz-player, and all-round musician collaborates with whoever he can, performing in various bands with rotating members and doing improvised, one-off shows whenever possible. “The clichés are true,” he explains, as we catch up on a late-summer evening in Berlin, “it keeps me on my toes and makes me a better musician.” And he’s not wrong.

His debut LP Become Alive arrived earlier this year. An album recorded with a bunch of friends and fellow musicians, including Jaar. It’s a record that embodies Harrington’s free-bodied approach and jazz lineage, but still somehow manages to come off sounding like a well-orchestrated, body of work. As a self-styled musician, it’s taken many years for Harrington to get around to making his own record, as DiS found out.

DiS: Who is in the Dave Harrington group at present?

Dave Harrington: The touring group for this run is myself, Sam Ghadry on drums, Andrew Fox – whose project is called VISUALS – and an incredible keyboard player called Morgan Z, who has a band called Chrome Canyons and makes this titanic synth-prog.

Is it like this Broken Social Scene kind of thing, where you all play in each other’s projects?

Yeah. It’s how I always do it and it feels like the right thing. I was playing in New York with a ton of people for a long time. Some were shows I organized, some by other people, some were improv and some even Grateful Dead tribute shows. It’s all been really cool, and it makes me a better musician and keeps me on my toes.

I was trying to find more about your other projects, Bladerunner Trio and El Topo, but there’s not much online about these.

Bladerunner has become this band that only really happens once or twice a year. It usually involves myself, Will the sax player – who’s on the new record – and Nico [Jaar]. It started out as one thing with me and a different drummer, and then it kind of shifted and changed into anybody’s band.

El Topo was my main New York act for many years. I tried to make a record and ended up with three versions that I was never satisfied with. I will make an El Topo record one day, or maybe I’ll just give away all these old versions for free. The band has at least two, if not more, drummers, and I would play bass with a guitarist and keys and sax and trumpet. It’s super heavy – post John Zorn, acid – exotic – metal. Songs that are hilarious – no vocals, no chorus and no structures that don’t made any sense. Actually, when I describe it like that, it sounds pretty good, [laughs].

There’s a big trend towards contemporary jazz through many of your projects.

I would say that I’m very much a product of where I grew up, in New York in the late 90s and early 00s. I was going to the downtown scene, to the old Knitting Factory, to Tonic mostly, and going to see John Zorn, Steven Bernstein, Michael Blake [and] Ben Allison. It was unpretentious jazz music that equally embraced groove, noise, a punk aesthetic, Latin or whatever.

The one band I saw probably more than any other was Steven Bernstein’s Millennial Territory Orchestra. Bernstein was the leader of Sex Mob, who I also saw a lot. He would lead this band, at what would seem like midnight on Friday each week. He’s a slide trumpet player, and he would try and conduct this band, and it was totally anarchic and anything would go.

You do live improv soundtracks to films. How are they received?

Its something I did periodically in New York, and started when a friend of mine who ran this club called Cameo Gallery lost their lease, and I offered to do a live film score. The first one we did was The Birds and this was a test run for what has evolved since.

We then did No Country For Old Men, The Cabinet of Dr. Caligari, and a Japanese film called Branded To Kill, which was interesting because for that we just turned the sound off. I like the idea of doing narrated films, because I don’t want it to just seem like visuals for a live show. I write a treatment for the band that breaks the film down into subsections that dictates what keys to play with conceptual cues.

With so much improv work, do you find it challenging then to record music?

Yeah, I’m still figuring that part out. Less so now after making the Darkside record, and my own record. I’m not sure what I want to do for the next thing, but I do feel more at home in that environment. Growing up as a jazzer and jammer, and in college playing in party bands, the idea of recording never really occurred to me until I started working with Nico. I just like playing, and there was something about Nico’s energy that made me feel different about moving through space and time in a different way.

And what can people expect from your live show?

It’s a very backwards process. There was one song on the LP I wrote before going into the studio and that the last song on the record. The rest of the stuff was based on improvisations that I turned into compositions. Now the band has learned those arrangements, and is using them as a rough template of where we want to go. Every time we rehearse, there are so many ideas and it makes me realize, we don’t even have to be playing any of my tunes. I’m just surrounded by so many amazing musicians and I try to incorporate that sprit into the set.

Become Alive is out now on Juno Records. For more information, please visit his official website.

“We needed to remind ourselves why we...