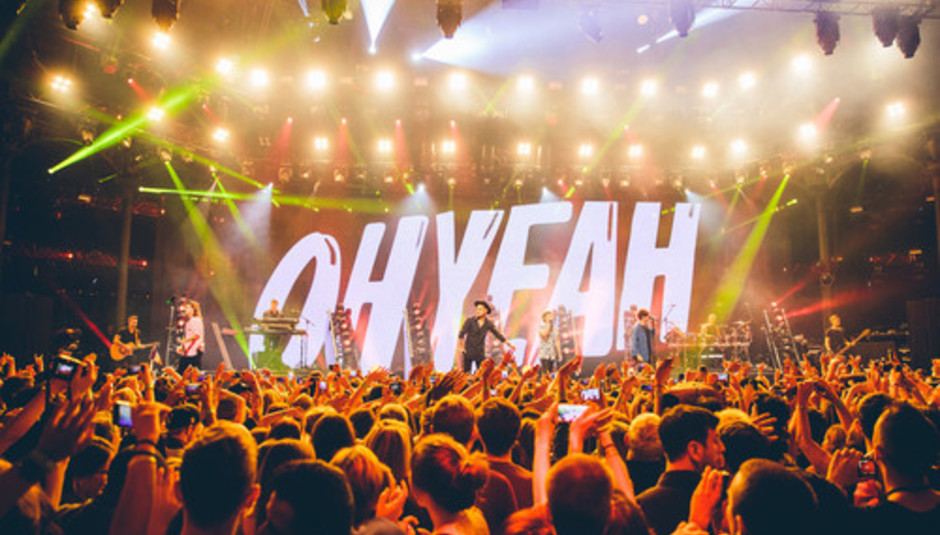 The best pop band in the UK played the Roundhouse in Camden on Tuesday night. They strode out confident and mature, banged out hit after heavy hit, danced, harmonised, bantered, threw love out into the crowd and got it back in spades. Then One Direction came on.

In a post-Girls Aloud world, Little Mix are our one true hope. You don’t realise quite how many bangers they have until you see them do a ten-song-set and they chucked everything they had at all of them. Opening with the girl power rallying cry that is 'Salute', there was no messing about as they dove into ‘Move’ (which, as you’ll know if you have ears, is their best song/the best song of all time) before treating the crowd to a combination of vintage ‘Mix and new tracks like ‘Grown’, another power tune that’s all hooks and sultry beats, and perfectly pitched at an audience of ageing tweens who have grown up with the band. An a capella rendition of next single 'Love Me Like You' all felt a bit Glee but they pulled it back with set closer 'Black Magic'. Every song caused us to clutch each other and shout, 'They’re so good!'.

It’s a brave move to open with your best track but when you have the kind of fans that One Direction have, it must feel like every song is your best song. Still, when that Meatloaf-esque piano part that signals the start of 'Steal My Girl' came on, my first thought was ‘Hmm, opening with your strongest track is a brave move’ and my second thought was ‘Oh my GOOOOOOD’ because a mania came over me. We had chosen to stand on the lefthand side of the stage. We had chosen well. With ‘the boys’ arrayed in a line across the stage, we had managed to pick the side with Harry Styles.


More on that later. First, let’s talk about the show. It’s pretty clear that One Direction are phoning it in these days - with a date set for their ‘hiatus’, we all know they’re in their notice period. They’re doing the pop band equivalent of playing solitaire and getting drunk at lunchtime, killing time until they’re no longer contractually obliged to sing these songs they don’t care for with these other guys they don’t really care for. There was the odd flash of brilliance but they were mainly going through the motions and did nothing to cause the true euphoria that you expect when you go to see the biggest pop act on the planet.

Still, despite the six ballad run in the middle - surely a firing offence - it was a decent if uninspiring show. The crowd melted under the intensity of 'What Makes You Beautiful' while One Direction clearly enjoyed the rockier tracks like 'Drag Me Down' and 'Little Black Dress'. It was pretty obvious that set closer Best Song Ever and its teenaged ilk are becoming a bit of an albatross around the necks of young men. Meanwhile, The Zayn Issue was addressed when Niall left the stage because 'he wasn’t feeling well' and Harry’s reaction was 'We’ve lost another one! They’re dropping like flies!' Don’t worry about Niall. He positively bounded back onto the stage after three minutes in the wings. They must have some good medics back there.

The capacity of the Roundhouse is 1,700, which is about 18,300 less than one sold out night at the O2 and 'the boys' clearly enjoyed being able to see and hear the crowd more than they’re used to. Hey, we all like being adored. And adored they were.

You can’t be a human person who is alive and attracted to men and not address the Styles Factor. I’ve never had any particularly strong feelings about Harry Styles before and I don’t have any particularly strong feelings about him now, but every time he came over to our section of the stage, I’d let out an involuntary whoop and throw my hands up or clasp them to my chest, my eyes morphing into lovehearts. These are actions I cannot explain. When he doused the crowd with bottled water, it felt like we were being baptised into the church of Styles. Then he’d stride off to another part of the stage and we’d all crane our necks to catch a glimpse of whatever he did next, while Niall strummed pointlessly at a guitar I’m pretty sure wasn’t plugged in and Louis mouthed the words without putting the microphone to his lips. Liam would twirl over in his gravity-defying hat and we’d all strain to look past him. It must be so annoying for them - but also, get out of the way guys, you’re blocking my view of Harry.

Academics will forever puzzle over this. What causes the collective mania of a crowd who simply cannot under the gaze of this one guy, this man who is not even that attractive objectively speaking, singing songs that are, at best, quite good, and running his hand through hair that, let’s be real, is getting ridiculous? It makes you wonder what will become of the other three who don’t have his presence or his ease with the crowd. He’s charming and warm onstage, greeting every area of the Roundhouse, throwing kisses out to the balcony and waving to individual fans who, presumably, died. It seems like second nature to him to soak up this tsunami of adoration and you get the impression that these aren’t the reactions that really matter to him. Towards the end, between saccharine speeches about the support they’ve received and shout outs to Apple Music, he demands the bored dads he’s spotted get up and dance. Then, when he asks if we’ve had a good time, he rejoices at the reaction. 'Even the bearded blokes are having fun. Hipster approval at last!' he roars, beaming like this is what he wanted all along.

Human After All: Auto-tune, Technolog...