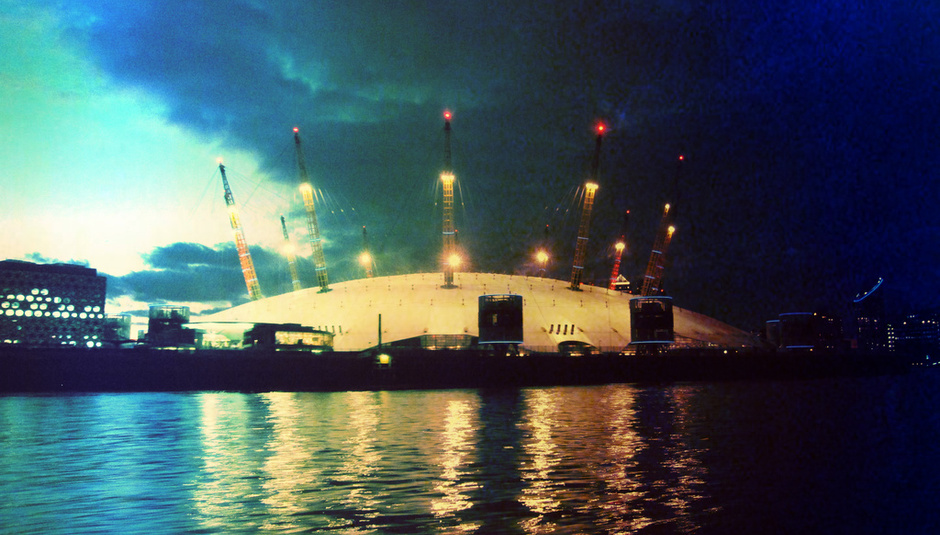 No-one saw this coming: The National

No-one saw this coming: The National

David Edwards reports on one of the biggest nights for one of DiS' favourite bands...

Coming up the steps from North Greenwich tube station this evening, The O2 Arena suddenly appears to our left, shrouded in the winter mist like some enormous creature emerging glistening from the Thames. And that’s the moment that reality suddenly hits home. This is where The National are playing tonight. The National: that previously obscure Brooklyn outfit. The National: perennial bridesmaids. The National: “Weren’t they the ones who had that song on House?” No, The National: that band who have defied all logic and somehow, through bloody, bruised and battered steps, reached the point where they can sell out a venue of this size and calibre. No-one saw this coming. Least of all - one imagines - the band themselves.

The sheer size of the venue aside, there’s little different from the general setlist of the Trouble Will Find Me tour, concluding tonight after a staggering 165 shows around the globe. The opening pairing of ‘Don’t Swallow the Cap’ and ‘I Should Live in Salt’ ease into proceedings but it’s when they bring out ‘Mistaken for Strangers’ and ‘Bloodbuzz Ohio’ that the crowd belatedly get fully behind proceedings. The sound somewhat suffers from the acoustic issues that any major arena gig has, especially during a muted, bass-smothered ‘Demons’ but much more impressive is how comfortable the band appear in such a huge environment. The band appear to be enjoying the occasion immensely. Matt Berninger is in a relaxed, jovial mood – dedicating ‘Mistaken for Strangers’ to London’s soon-to-be-gone Buffalo Bar, cracking about how his brother ‘Doesn’t like any of our slow songs’ before ‘Abel’ and regularly downing wine and tequila during the set. Also hugely impressive is Sufjan Stevens, who sits in with the band throughout the entire show and provides some gloriously fitting harmonies, even incorporating a small sliver of ‘Chicago’ into the end of ‘Ada’, which is recognised and acknowledged warmly by the crowd.

Too often, bands elevated to arena status seem like rabbits caught in headlights – unable to replicate the close-quarters confined energy of their earlier shows. In contrast, so many of these songs seem to belong on the biggest stage of all. Specifically, the quite astonishing run of ‘All the Wine’, ‘Abel’ and ‘Slow Show’ that arrives midway through proceedings. There really can’t have been many better trios of songs ever played beneath the dome and it’s the moment where everything suddenly clicks for them: the entire show goes up a gear and from that moment on, they simply revel in the occasion. ‘England’ and ‘Graceless’ pound the rafters, ‘Mr November’ sounds as if it was written to crash and roll around the upper tiers of the venue and ‘Terrible Love’ sees Matt disappear into the crowd, emerging for the finale – an unplugged ‘Vanderlyle Crybaby Geeks’ that is sung along by thousands of willing voices. And then, as a final moment of celebration as their eighteen-month tour finally comes to an end, Matt gleefully stagedives into the crowd to shouts of encouragement and ringing applause.

The National have played, and will almost certainly play better shows in the future. But it’s unlikely (certainly on these shores) that they’ll ever have such a crowning moment of triumph and recognition of their continual excellence over the years. For those who despair over conveyer-belt industry fodder thrust cynically in their faces from every media medium, this is a validation of what really can happen when a band sticks to their guns, toughs it out and has the sheer force of will to succeed; however unlikely the odds. If anyone had suggested back in 2004 that within a decade, Arcade Fire would headline Glastonbury and The National would pack out the O2 Arena, they would have been answered with serious glances at where a nearby psychiatrist could be located. The success of both this year shows that far from being dead, alternative guitar music may actually be in as rude health as it ever has been. This was a triumph for the little guy - a validation of the love this band has garnered over the years. And a reminder that music will never lose its ability to surprise and amaze you with every turn. Many seeds have been planted in many hearts over the years by The National. Tonight, they gratefully took home their harvest.

In Photos: Band Of Skulls @ Hammersmi...