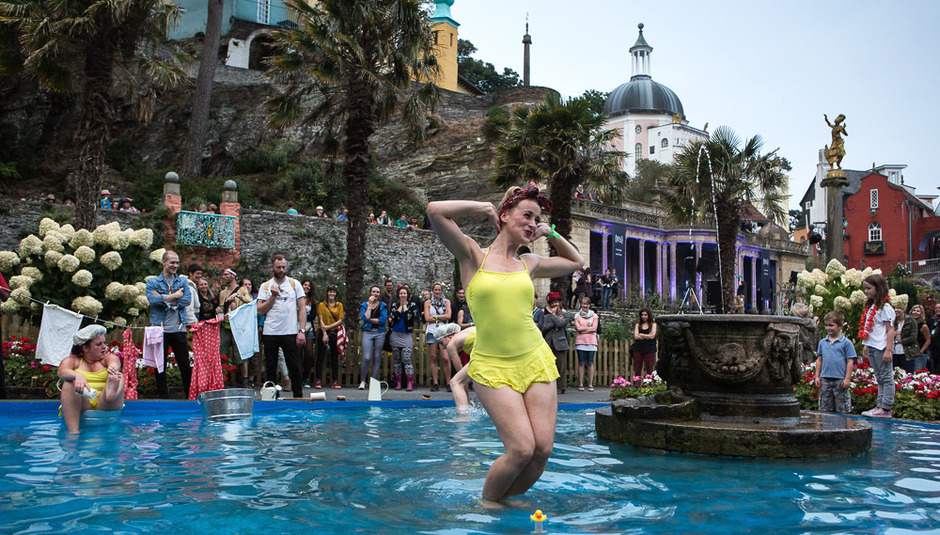 Set in the beautiful, picture-postcard Welsh seaside town of Portmerion – famous for the cult Sixties UK TV classic The Prisoner – Festival No. 6 is effectively four festivals in one. An increasingly impressive array of guitar, soul and electronic acts play the main stages, alongside gourmet food trucks and real ale bars.

Venture through into the town and you’re struck by the dazzling colours and sublime shapes and views that comprise Portmerion town centre. As you walk through, you can see anything from the Brythoniaid Welsh Voice Choir singing New Order tracks, to candlelit processions, comedy shows and impromptu stage performances amongst the most spellbinding arena of any UK festival.

Take a right into the woods and you come across nature trails, hula-hoopers, sound systems and folk in fancy dress.

And if you’re after a good old fashioned rave up, you can head down to the Stone Boat Bar to take in eye-watering views of the Estuary while listening to DJ sets. In a nutshell, you simply cannot pigeonhole it. And that contradiction in terms is what makes Festival No. 6 so strikingly unique – you really must experience it to believe it.

We begin our festival on Friday by strolling down to the main No. 6 stage for Patrick Wolf, who indulges us with a hauntingly intimate and stripped-back set. There’s nothing stripped-back about Los Campesinos! who follow him, seemingly thrilled to be back on home turf and proceed to rattle through a set heavy with tracks from their last two records, before knocking things on the head with a raucous ‘Sweet Dreams, Sweet Cheeks’ that sees Gareth wander into the middle of the crowd before the band finish arm in arm on stage singing in unison with the audience.

As darkness falls, Bonobo prove to be a revelation on the main stage – a stunning light show helping carry their gorgeous, elastic sounds to the ears of many newcomers and resulting in a euphoric reception that leaves the band quite stunned as they leave the stage. Clearly most of them are here to see London Grammar who follow-on after them as headliners, though somewhat later than planned. It’s been a whirlwind rise for them but they take it in their stride tonight with their slow-burning anthems seeming polished, well-honed and now well-familiar to the crowd. They aren’t entirely helped by the sound-bleed from some of the other tents and you still feel that they need a few more songs to be able to fully sustain their momentum over a headline slot, but Hannah Reid’s voice is a thing of beauty and ‘Strong’ is already sounding like a classic track.

Saturday morning’s brief rain show dissipates as we take time to walk around the woods and enjoy the excellent AudioFarm stage set in amongst the trees. Back down on the No. 6 main stage, Peter Hook and the Light continue to add spice to the tempestuous New Order split by playing a quite excellent set in the sunshine. He’s in combative mood (insulting at least four former associates in a 45 minute set) but in contrast to the often over-slick New Order reinterpretations, the Joy Division songs rattle and shake with nervous energy and tension. You can’t help but feel Hook is starting to win over the doubters: myself included.

Jon Hopkins is typically blissful and beautiful, though the muffled sound in the i Stage prevents some of the subtleties of his music fully coming across to the audience. And then we’re back at the main stage for Beck, who most of us think is going to do an acoustic set, based on his recent Morning Phase album. Not a bit of it. He’s in absolutely blinding form tonight – drenched with funk and buzzing with sheer energy. Within the first 20 minutes we’ve got ‘Devil’s Haircut’, ‘Loser’ and ‘The New Pollution’ and he keeps the momentum going with a brilliantly tight band and constantly telling the crowd how much he loves the festival (“Can we come back next year?”). The closing duo of ‘Sexx Laws’ and ‘Where It’s At’ are delivered with a sleazy slacker gusto and having utterly triumphed, he leaves the crowd to walk off dancing and clapping into the night, where we’re kept going into the early hours by Todd Terje and Greg Wilson.

Sore heads and sore feet necessitate that Sunday morning is spent relaxing and taking in the Portmerion sights and sunshine, before we head down to see Martha & The Vandellas play a classic hits selection. That said, there seem to be even more classic hits in the Paul Heaton & Jacqui Abbot set. You really do forget how many brilliant, timeless songs Heaton has written over the years and with his typically dry wit (responding to boos that the set is nearly at an end by saying “If you’d all bought our new album, we’d be higher up the bill!”) and wall-to-wall classics, the set is a wonderful and heart-stirring triumph, as referenced by a closing ‘Caravan of Love’ that sees most of the crowd swaying arm-in-arm. Marvellous.

Equally marvellous is Kelis, whose Food album has become one of the slow-burning success stories of 2014. She and her band are on brilliant form tonight, soaking Portmerion in a wave of soul and sultry jazz as she reinterprets her older songs (‘Milkshake’ becomes a soulful swirl and ‘Good Stuff’ takes on a jazzy hue) but it’s the new tracks that really shine – she sounds utterly at home with her music, as if this is the place she’s wanted to arrive at all along. As for Tune-Yards, she’s gloriously unaware of where she wants to end up with a dizzying blur of sound, rhythm and energy that propels limbs and lungs into overdrive around the i Stage – genuinely one of the most interesting and unique artists on the planet at this time.

And so, it’s left to The Pet Shop Boys to close proceedings. Having apparently been responsible for the festival switching the main stage to outdoors for their light show, we’re expecting big things. And my word, don’t we get them. A near-perfect 90-minute set of classics played to (by far) the biggest crowd of the weekend, their peerless collection of electro-pop songs dovetails perfectly with a striking visual set-up, including interpretive dancers on stage with them, Neil and Chris being strapped into giant vertical beds with projections played over them and swathes of colour and neon illuminating everywhere. And as for the music, it’s so much more banging than you’d have imagined – specifically an incredible ‘It’s a Sin’ which utterly consumes the arena. Leaving ahead of the encore, the stage is quickly filled by microphones before – in a surprise and glorious twist - the Brythoniaid Welsh Voice Choir arrive to celebrate their 50th anniversary by accompanying the band with a rousing, stirring and beautiful rendition of ‘Go West’ that brings many in the crowd to tears – reminding you once again how unique, special and glorious this festival is. There’s just enough time to catch a brilliant DJ set by Michael Mayer before our time is finally up at Festival No. 6. But as we head away into the night, all we can talk of is coming back again next year. There really is no other festival like it and as a way of closing out the summer, Festival No. 6 delivered in every single way. Simply magnificent.