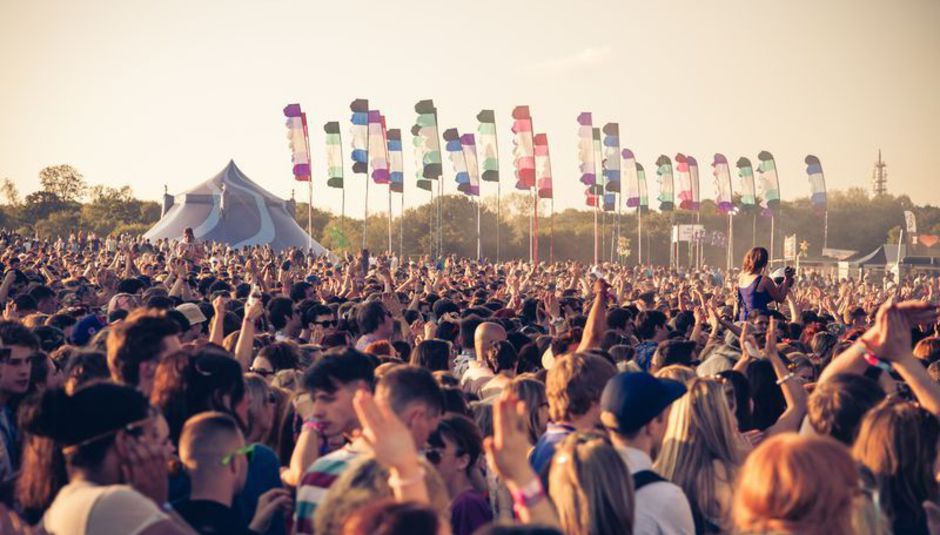 Though its stature as a festival has swiftly risen since its inception in 2010, many of Manchester’s more leftfield music fans can be somewhat sniffy about The Parklife Weekender. And there’s certainly been reason for that in years past. As with most festivals that don’t require excessive traveling or camping - and therefore permit hedonism to those who wouldn’t normally make the journey to an outdoor event - there’s always going to be a percentage of the crowd devoted purely to chaos. But far less than most would have you believe. There are still a few areas for Parklife to work on as it continues to grow and progress as a genuinely mainstream event but, as it transpired, 2013’s event landed a major step forwards. Trojan Sound System get things moving before we’re off wandering and considering a go on the log flume, instead heading back down for Crazy P, who prove superb fun with their electronic disco-funk. They’re lacking a couple of genuine standout singles to balance the set but it’s generally excellent party fare. Following them are Delphic, who considering the initial clamour that greeted their debut in 2010 and the homecoming nature of today’s set, it’s surprising to see take the stage in the midst of the afternoon. They work it to their advantage however as they garner a good crowd, and though there’s still clearly a warmer welcome for the likes of ‘Acolyte’ and ‘Halcyon’, the tracks from Collections actually stand much prouder in the live surroundings, with ‘Baiya’ and ‘Atlas’ being particularly storming. They’ll clearly never get to the promised heights suggested by their early singles but it shouldn’t be forgotten that when on form, they’re a quite superb live band. We stick around for twenty minutes of Rudimental but nothing catches fire: they’re not dreadful and they do have occasional moments of head-spinning sound collision but they're decidedly unremarkable as a live act and are lacking in any true spark from a band with two Number One singles behind them. Jaguar Skills on the other hand is much better. It’s difficult to get anywhere near the inside of the tent as he gives an excellent lesson in turntablism as he splices pop songs, jazz samples and assorted breaks and beats together – like a dirtier Mr Scruff who isn’t quite as keen on delving into his tea bags.

With the ever-impressive Four Tet, things continue to grow more weird and more wonderful as he builds layer upon layer of beautiful floating melody and subtle rhythmic nuances. A crowd of beach balloons appears from the stage and are gently passed across the ecstatic crowd – the atmosphere building throughout the course of the set. As we come out of the tent, we get to see The Maccabees close out their main stage set by absolutely tearing ‘Grew Up At Midnight’ up – you can’t help but admire the way they’ve honed themselves as a live band over the years. As a climax to the day, we choose to snub Plan B for a trip towards the Tuneful Trees stage for a riot of ska, folk and bawdy tales with the excellent mutant folk of Gorgeous George, as we dance around swigging vodka with circus and burlesque performers to end the day. Frankly, I’ll take that kind of life… Sunday arrives with even more persistent sun and searing heat, to the point where liberal application of hats and sunscreen proves essential for Riot Jazz at the main stage. It’s a slow start, as despite the combination of skanking horns, tuba bass-lines and ska-karaoke versions of classic pop songs being a winning one, it’s too stop/start to really make things click. But then, right at the end, they throw in a sublime horn recreation of Fleetwood Mac’s ‘Everywhere’ before finishing with a marvelous version of Bon Jovi’s ‘Living on a Prayer’. It’s daft, silly, and probably makes very little sense on a freezing cold and rainy day but here, with thousands jumping for joy, it was one of those festival moments where the whole world just seemed to sit perfectly right on its axis.

Dusting ourselves off, we’re over early to grab a decent space for Toro y Moi, whose live show is perfectly balanced between exploring their more subtle chillwave bloodflow and playing up to their more excitable, free-limbed excursions. We then stroll to the top of the hill near the large white Parklife sign where we spend some time with The Hooping Harlots – a troupe of hula-hooping dancers performing remarkably impressive routines between themselves, as well as the occasional passer-by. I’m somehow roped in. The results are less than amazing, to say the least. I’ll stick to the day job and leave the rest to them...

Iggy Azalea is refreshingly vibrant and sassy as she works the crowd through a sweat-flecked version of ‘Working on my Shit’ but we’re really only on a bar detour in time to see Liars. Who absolutely steal the show today. Phenomenally taut, vacillating between claustrophobic pressure and lysergic release, they comprehensively own the Now Wave tent. Brimming with ideas and stunning twists and bridges between songs, it’s a 30 minute exercise in how to put on an outstanding live dance-rock hybrid that is almost impossible not to get lost in. The only downside is how they’re suddenly ushered off the stage prior to commencing their final song, clearly having passed some sort of curfew. A shame, as I could have listened for hours – intensely special.

There’s then a frustrating clash between Jurassic 5, Hudson Mohawke and Johnny Marr. Although the latter’s slightly later start time means we see twenty minutes of J5, proving it’s entirely possible to do an elastic and tight live hip-hop show, even despite their six years apart. But then it’s off to Johnny Marr, with a slight scepticism in my mind after mixed reports from his Stone Roses support slot the evening before. I needn’t have worried. Whether it’s the return to local soil or an urge to prove, he’s on stunning and blistering form – rose in teeth and Fender Jaguar in hand. It’s true, he’s not Morrissey, and hearing such songs coming out in his own voice is certainly unusual. And yes, I’m sure there’s few – if any – who wouldn’t wish to see Steven Patrick Morrissey stood next to him. But this is Johnny Marr – one of the greatest and most influential guitarists, composers and arrangers in modern British music. Playing some of the greatest and most influential songs of all time. And along with his band, playing them brilliantly. His solo tracks actually grow teeth in the live environment as he tears into them, and The Smiths tracks are sung to the highest rafters of the tent. As everyone sings along to ‘There is a Light that Never Goes Out’ and I’m arm in arm with a crowd of people as the hula-hooping girls spin fluorescent loops around us, it’s a quite sublime and wonderful communal moment of joy and celebration. And Marr looks like he loves every bloody minute of it.

There’s one final treat as the sun finally goes down behind the surrounding hills, and it’s definitely not Example, who is doing something unfathomable on the main stage. The Horrors are our destination in the Now Wave tent as their reputation as a live band continues to be fortified. Faris apologises for it being their first show in ages but you really wouldn’t have known – they’re as tightly wound-up and sweeping as they’ve ever been. ‘Endless Blue’ and ‘Still Life’ soar, but it’s a gloriously rich and sweeping version of ‘Sea Within a Sea’ that truly shines tonight. We’re all hoping for at least one new song but they don’t oblige us tonight, instead promising to return soon. With album number four not too far away now, we’re anxious and eagerly waiting. For now, they’re as brilliant as they’ve been since the start of the Skying tour. Anything to come is a richly awaited bonus.

Though some will still scorn, Parklife 2013 surpassed expectations, and in my eyes, much of that can be traced directly to its location. There are certainly still issues with Heaton Park as an accessible venue – despite the best efforts of the organisers, the queues for the Metrolink and the buses on the Saturday and Sunday night were still uncomfortably busy. But you’re always going to have problems dealing with 60,000 people getting in and out of what is basically a suburban park (getting in and out of The Stone Roses and Oasis were far more unpleasant experiences in comparison). What the new venue did was to create an atmosphere wherein there was space for people to relax, dance and easily reach the stages (Platt Fields, in contrast, felt like everybody was piled in on top of each other in the mud and rain, creating a tense powder-keg atmosphere) In contrast, as continual glorious sunshine baked down, a celebratory party unfolded, and despite the main stage proving hit-and-miss, some wonderful and unexpected treats were to be found on the smaller ones. We’ll have to wait and see whether Parklife can sustain the trick on a weekend where the weather proves to be somewhat more typically Mancunian. But for now, it managed to pull off its graduation with aplomb and unabashed enjoyment. All images by Daniel Watson

In Photos: Isle Of Wight Festival 2013