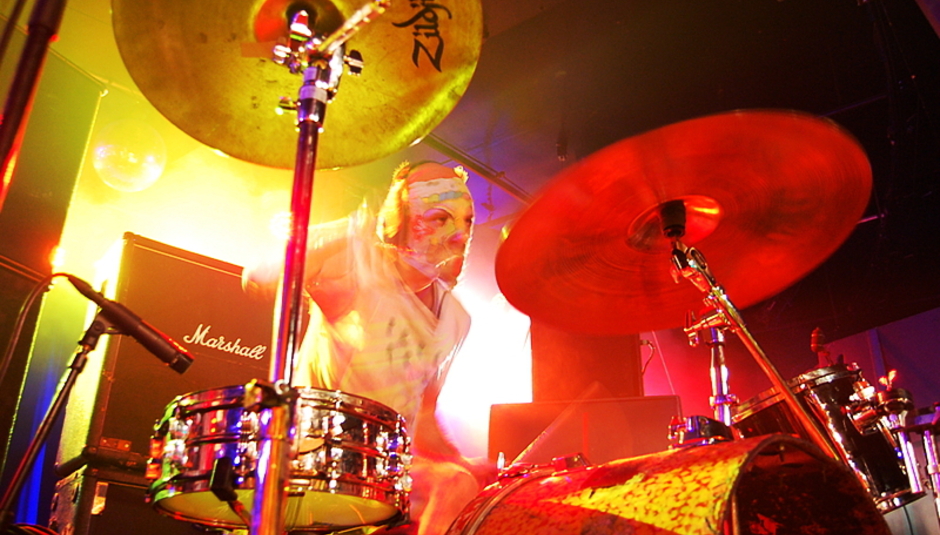 Too many burgers, too much alcohol, not enough sleep. There really is only one cure - a mid-afternoon spent in the company of A Place To Bury Strangers. Playing as a five-piece for possibly the first (and only) time ever, they are simply astounding, not to mention by far - MBV included - the loudest band we encounter all weekend. Playing songs from both their self-titled debut and recent long player Exploding Head, the noise emanating from the stage reaches colossal heights during the final segment of 'I Lived My Life To Stand In The Shadow Of Your Heart' and 'Ocean'. A girl stood at the side of me with her fingers in her ears appears to be physically sick. But in a good way, if you can quite grasp it. Band of the weekend, no contest. (DG)

Th’ Faith Healers were one of the unexpected highlights of the Breeders' ATP; possibly they’d have been one of the highlights of this one if they weren’t so patently hungover. It’s still fun, but the drummer is struggling to keep time, and the concluding barrage of sound is, inevitably, but a child’s toy next to the hosts’. Next time, those guys should freshen up in the Space Bowl first. (AL)

With one of the most extensive back catalogues on display here all weekend, it's more of a test to wonder what Swervedriver won't play rather what they actually do. As runner-up to Josh T Pearson in the he's here, he's there, he's every-fucking-where stakes all weekend, Adam Franklin is instantly recognisable the minute he walks on stage as that bloke we were talking to last night in Crazy Horse/Reds/Pizza Hut (delete where appropriate). Although the first ten minutes seem a little subdued, 'Duel' kicks proceedings into life, and with unexpected Guided By Voices covers thrown in for good measure, their performance soon turns into one of the weekend's best. Topped off by a rousing triple whammy of 'Rave Down', 'Son Of Mustang Ford' and 'Duress', Franklin and co. seem visibly moved by the rapturous reception they receive at the end, so much so that they take it in turns to applaud the audience and bow like actors leaving the set of a West End play for the final time. (DG)

múm are entrancingly weird, their snowy soft walls of bonkers sound an antidote to the rather chug-heavy norm of the festival. Not every band can boast of being able to mount a twin melodica assault. (AL)

Having already delighted several hundred punters the previous night with his impromptu performance during No Age's set, Bob Mould has the unenviable task of following suit all on his ownsome, of course. That he chooses to fulfill this by playing a crowd-pleasing set of solo, Husker Du and Sugar material means we actually get mini-moshpits forming to the sounds of a singer-songwriter with a (semi)acoustic guitar. Nevertheless, 'Hoover Dam' and 'The Act We Act' are phenomenal, so much so that we miss most of Dirty Three's set in the process, enraptured. (DG)

Former curators Dirty Three are as sad, massive, tear-jerking, epic and hilarious as you could hope. It’d probably be the set of the day if it was just Warren Ellis rabbiting on about going to a vending machine whilst on acid. But it’s not: it’s a luminously beautiful, occasionally fiery meeting of quite probably the three finest musicians at a festival not exactly wanting in that department. (AL)

The word "stalker" wouldn't normally be applied in a musical sense, but having witnessed The Pains Of Being Pure At Heart a dozen times in the past year I guess you could apply that tag to yours truly. Thing is though, no matter how many times one catches them in the flesh, they rarely, if ever, disappoint, and tonight is no exception. Providing possibly the only sumptuous pop thrills of the entire weekend, their set is an energetic dance-fuelled workout from start to finish, 'Young Adult Friction' and 'Everything With You' both causing near riots down the front. Despite playing exactly the same set as they did at the previous weekend's Reverence 2 festival, there's still something remarkably fresh and exciting about this, not to mention human-like, as Kip Berman's emotional thankyou speech at the end demonstrates. (DG)

Reviewing Lightning Bolt (the not so secret weekend's 'tba')... well, it's sort of pointless, isn't it? They seem to have taken to performing on an actual stage since debuting this manoeuvre at Primavera, and that's fine by me - as the band's crowds grow, a once egalitarian act was in danger of becoming elitist. I mosh, gleefully, for the first time in years, while noises that feels like the most intoxicating melodies surge and roar from the two men slightly above us.(AL)

With the disappointments of Friday night an all but distant memory, it's left to My Bloody Valentine to prove once and for all just why they're held in such high reverence by pretty much every guitar band of the past twenty years. Tonight's set is one juggled around slightly from the previous two evenings, only this time every single moment is delivered with a dexterous professionalism that illustrates Kevin Shields and co.'s objective for faultlessness. Surprisingly, it's the pre-Loveless material that stands out here just as much as their more feted works, EP tracks 'Thorn' and 'Slow' both delivered with a masterful precision that makes us wonder why they were thrown away as b-sides. The answer isn't long in coming either; 'Feed Me With Your Kiss' is tumultuous in its execution, while 'You Made Me Realise' is a relentless exercise in the sweet (the first two and a half minutes) and the downright brutal (the ensuing twenty or so). (DG)

Having just about lost all sense of hearing, the mellower, beat-infused strains of School Of Seven Bells are left to take us into the early hours of Monday morning. What's more, they're a sublime counterpoint to what's gone before, finally soothing the nerves before bedtime and that long journey home. (DG)