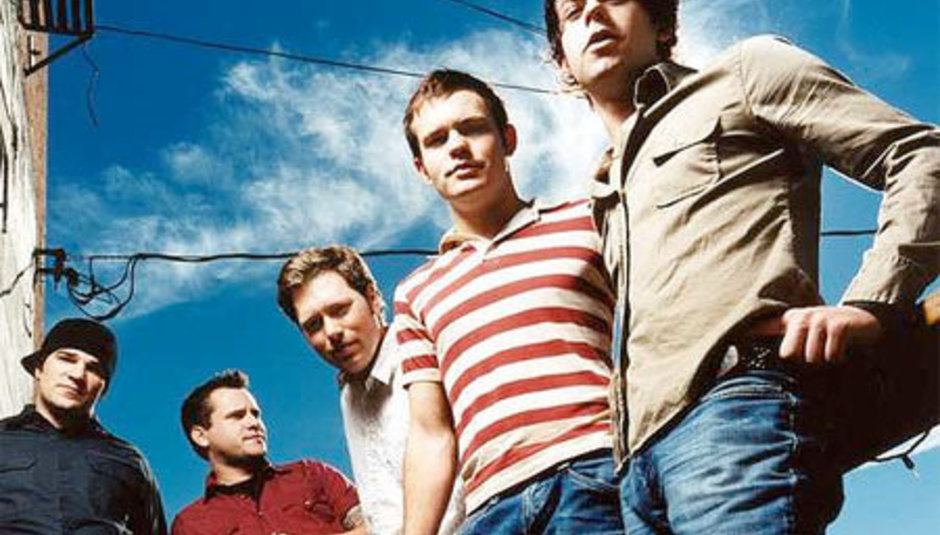 "All good things have endings," sang The Get Up Kids, many moons ago. And so it came to pass: in the midst of a tumultuous European tour four years into this millennia the band made the decision to call it a day, finally bowing out with a sold-out show in their hometown of Kansas City the following year. Though a slew of other projects followed, hearts were broken across the land, and the group's influence is widely acknowledged amongst the many acts who fall under the 'emo' banner of today.

As you’re no doubt well aware by this point however, their story isn’t quite finished yet. Come September 7th, Something To Write Home About will be given the tenth anniversary reissue treatment courtesy of long-time label Vagrant, and in celebration of this milestone release the band are hitting the road for a series of dates in Europe and the US.

Excited? We most definitely, definitely are. In this age of reunions big and small, The Get Up Kids' decision to get back together is one that warms the cockles of this writer's heart. We caught up with founding member Jim Suptic for the lowdown…

These dates and the reissue of Something To Write Home About have been on the cards for a while now – since around a year ago, I think? So, the glaringly obvious first question is: why now?

It all started with a few band meetings. We really needed to get our band's finances in order. During these meetings everyone was getting along really well and the idea of a tour came up. I think we all decided it would be fun. So far so good…we feel like the reasons we broke up in the first place don't matter anymore. If we can tour, why shouldn't we?

How do you feel about going back on the road proper – are you looking forward to it? From what I understand you guys were fairly burnt out when you made the decision to disband back in 2004...

Everyone is in a totally different place than we were five years ago. Better places. It's more about having fun than running a business, which I think is what happened before. And yes, I am very excited.

Every member of the band has remained active in some capacity since the split. Have you been keeping up with each other's projects and activities – and with each other, in general?

It was hard when everyone lived all across America. I also have a two-year-old daughter which takes up most of my time. Since we have been practicing it's been great to hang out with everyone [but] when we split up we really needed a break from each other.

How do you feel about the 'emo' tag that Something To Write Home About led to? And what about that word, 'emo' – the connotations have certainly changed some over the years, pre and post-Get Up Kids.

Honestly, I don't often think about the state of 'emo'. The punk scene we came out of and the punk scene now are completely different. It's like glam rock now. We played the Bamboozle fests this year and we felt really out of place. I could name maybe three bands we played with. It was just a sea of neon shirts to us. If this is the world we helped create, then I apologise.

And what do you think of the myriad bands who have sprung up in your wake, often to far greater commercial success? Certain acts have been particularly vocal in acknowledging the debt they owe you...

I think I summed it up in the last question. If a band gets huge and they say we inspired them, great. The problem is most of them aren't very good. What does that say about us? I don't know. Maybe we sucked. We at least can play our instruments.

What music have you been listening to of late – has anything really jumped out at you?

And taking things back a step or two, who were the bands you consider pivotal in helping form The Get Up Kids' sound?

Fugazi is the reason I am in a band today. When I was 14 I heard Fugazi and started a band the next day. We grew up on indie rock. Superchunk, Rocket from the Crypt, Sunny Day Real Estate, Cap'n Jazz. That's the kind of stuff we were listening to when we started.

In broad terms (as it's something of a huge question), what's your feeling about the music industry in 2009 compared to how it was when you formed, in 1995?

As someone who started a new band after The Get Up Kids I can tell you it is a lot harder in some ways. There are so many bands out there, how do you find what's good? On the other hand there are so many outlets for you to be heard. I also think digital recording is killing live music. Bands that suck can make themselves sound decent with things like autotune. Then they play live and it's a train wreck.

I'm keen to get your seven years' hence take on On A Wire. (Much like The Promise Ring's Wood/Water LP, it feels like that album never really got its dues.)

We have always been a band that is not afraid to change. That's one problem I have with the punk scene. Punk is an attitude and an ethic, not a sound, yet some people in the scene want white bread all the time. What's wrong with trying a new flavour? I think the songs from On A Wire are strong. I am proud of that album.

What sort of sets can we expect from the dates? Is 'Campfire Kansas' likely to get an airing?

We will play 'Campfire Kansas'. We are going to try to play a good mix of all the records, with an emphasis on STWHA.

And finally, I know a lot of people are wondering if plans extend any further than the reissue and tour...?

We hope so too. Something To Write Home About is reissued through Vagrant on September 7th with a bonus DVD featuring a live show recorded in the band's hometown of Kansas City (expect a review on DiS nearer the time). Until then, feel free to scope the European tour dates below while coming over all dewy-eyed at 'Action And Action' (rest assured, that half-speed drop-in near the end sounds as sweet as ever).