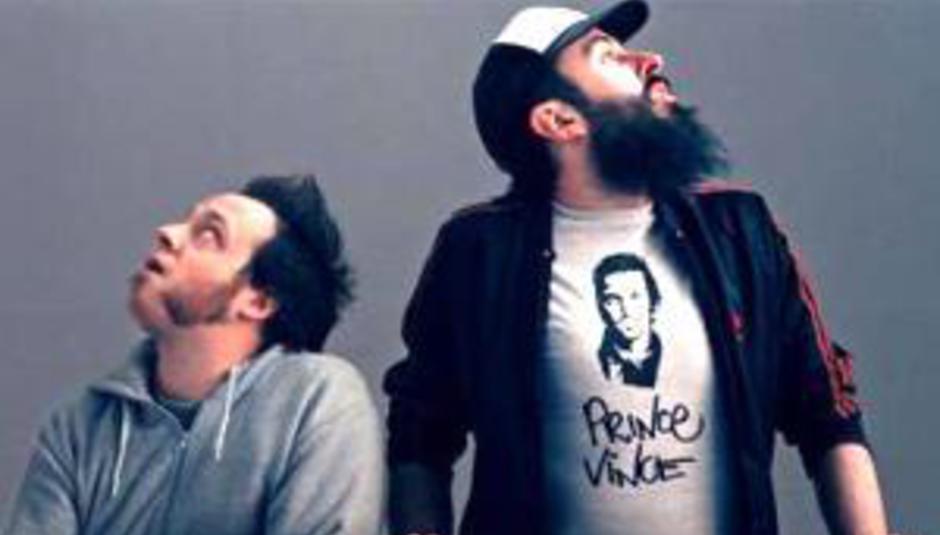 With their debut album, Angles, out this week, it’s a fine time to probe the indie-rock fan’s hip-hop duo of choice on essential matters. So, taking current single ‘Look For The Woman’, out now, as inspiration, insert tongues firmly in cheeks, in every sense, for Dan Le Sac vs. Scroobius Pip’s (in)complete guide to love...

First thing first: what do you do when you meet the partner of your dreams?
Scroobius Pip: You try not to meet in the whole across the room at a bar or a club situation. It’s just going to sound like a horrible chat-up line. Even if this is the girl of your dreams, you’ve fallen madly in love, you go over and tell her and she’ll be like, "Fuck off mate, I’ve had eight guys tell me that tonight". I find the best way is make them your friend and then take advantage of them when they’ve had a bad situation happen, because you’re already in that confidence thing.
Dan Le Sac: This is going to be typed up so sarcastic ones won’t work. That will just be, "Pip is a raper".
SP: I was leaving a party once with an ex of mine who was very drunk. I’d just cleaned up her sick and I was getting her a lift off a mate to take her home. I was staying there. On the way out a good friend of mine said, "Mate, don’t do anything, she’s a drunk, she doesn’t know what’s happening". I was like, "You think I’m the kind of guy that takes girls when they’re smashed and rapes them? Cheers!"

So you avoid any dubious date rape scenarios and arrange a second rendezvous – where do you take them on the first date?
SP: Everyone says you shouldn’t take a girl to a cinema, you should take her somewhere where you can talk and actually connect, otherwise it’s not really a date. But I really like films and a lot of the girls I go out with are into films, so going to see a film’s good. And then you’ve got a bit after to chat about the film.
DLS: If you do it right the film is something you get the chance to connect and chat about afterwards.

Assuming the cinematographic method comes up trumps, many weeks down the line, how do you go about surviving the two-week/two-year itch (delete according to flightiness)?
DLS: To be crude, make it your task to fuck your girlfriend as many times as possible. Just pound away, keep going, and you just get through the itch. Just be dirty with her; do all those special moves you wanted to try out.
SP: General people’s idea of "something special" is do something romantic. Here’s the special stuff: fuck her in the arse! That’s not special! You’ve got a warped perception. Do some dirty stuff! Something special! Try wearing a hat!

Have you tried that?
SP: I always wear my trucker cap. I get an eight- or nine-month thing like that in most relationships I’ve been in. A lot of them have ended after eight months. But it’s best if you just stick through it...
DLS: Exactly what I was saying!
SP: You were saying do something dirty! If you keep going then you start from the beginning again, you see what it was that was great and get back into it more than you were initially maybe...
DLS: Pound her!
SP: ...or do something dirty.

What’s the answer to resolving, or even avoiding, arguments? Compromise?
DLS: The problem is if you compromise in the modern sense, where you just agree with her, you end up hating everything. You’ve got to stand up and fight: if you think you’re right, you’re right. Otherwise you get into a situation where you’ve been with someone for seven years and it’s not working.
SP: You see, I don’t mind being wrong. In them situations I’ll just go, "I can’t be arsed to be annoyed over this anymore". If that means I’m the one that backs down, then that’s the case. I’m just very laidback. I don’t see the point holding this grudge with the person you’re in love with. Holding a grudge is meant to be for your enemies.
DLS: Up until my most recent relationship, I haven’t been in a relationship where being able to say, "Well I don’t agree, but let’s leave this here" has been an acceptable way to go. I’ve only been in relationships where it’s "Yes" or "No". So, yeah, don’t go out with my exes...

If those arguments culminate in finding the arms of another, what do you do if you’re caught cheating? Or what would you do if you caught them out?
DLS: Err, I’ve never cheated.
(Scroobius Pip laughs knowingly)
DLS: I’ve never been caught cheating. I’ve caught someone cheating on me but we’d only been going out a couple of months and I think I was cheating on her anyway, so it was alright.
SP: I’ve never cheated on anyone. I’m very straightforward: if there’s someone else I want to have sex with then I shouldn’t be in a relationship with someone else.

- - -
And if the writing isn’t on the wall in somebody else’s bodily fluids yet it's still not working out, how do you go about dumping someone?
SP: The best thing is to make them feel as if you’re the victim. I’ve mastered that for years. Find a way to make it seem like they’ll fucking regret it so bad that they’ve missed this great opportunity, when really you just got off lightly. I’m saying it as a joke but I bet someone’s going to read that now and go, "What?!"
DLS: I’ve never been very good at it. I’ve gone for the technique of doing it all wrong, being a cunt for months, really hurting people and having them hate you. Because if they hate you, you don’t have to deal with them again.

Turning the tables, how do you survive being dumped?
DLS: My dad told me once that for every month you’re with someone, give them a day of grief. So if you were with someone for 12 months, you’re only allowed to mourn the relationship for 12 days. Because my dad’s quite hard I just agreed. It may not be healthy but it works.
SP: If you’re lucky/unlucky enough to have big relationships when you’re young, have them go wrong and have fucking years of being really torn up then you don’t have it anymore. When you get older, you look back and go, "Actually that big dramatic time when I was so depressed doesn’t really mean shit now". In my experience of recent years, not in an offensive way, keep yourself busy, move on, and use it as drive.

There’s nearly always someone waiting in the wings to pick up the pieces should your relationship go nipples skyward. How do you fend off other suitors?
SP: It is weird. There’s not a lot you can do. Because I’ve always had a lot of female friends, completely platonic friendships, it has ended relationships in the past. From the other side it’s not easy if your girlfriend’s always hanging around with some dude. But the worst thing to do is whine. If you are feeling a bit jealous all you do is make yourself look unattractive saying, "Are you sleeping with him?" At the same time you have to balance that with being jealous as well, because women need you to be jealous as well as not jealous. There’s not really an answer there.

The miraculous occurs and, after all these perils, you’re still together. What’s the secret of a long and happy relationship?
DLS: You’ve just got to be honest, trustworthy and trusting.
SP: A mate of mine got with his lady quite young and he had the screwed-on thing if it’s going good that’s enough. It doesn’t have to amazing all the time or all highs and lows. His other thing was you’re a grown up. You don’t need to have all this reassurance, like I need to know girls still fancy me. If you’ve found someone you can live with and be in love with then stick with it. You don’t have to piss about so much. Grow up!

Angles and ‘Look For The Woman’ are both out now on Sunday Best. For pre-potential purchase listening, videos and a whole bunch of blogs and the like, peep Dan Le Sac vs. Scroobius Pip's MySpace.

For those who prefer leaving the house, the duo continue on seemingly ceaseless touring throughout the summer, including appearances at every festival you've sort of never heard of, and more...

Finally, a disclaimer from Dan Le Sac...
I just want to clarify, ‘Look For The Woman’, which is a breaking up song, isn’t about any one person. Pip wrote his half, I wrote my half. The chorus is about every girl I’ve ever been with, and Pip’s [contribution] is about a collection. Because there have been some harassments!