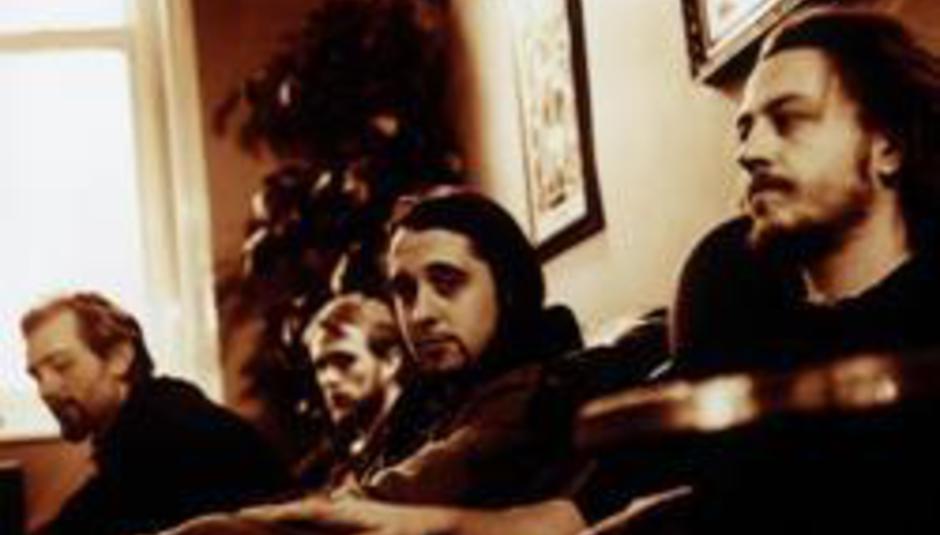 65daysofstatic: touring ‘til the tank’s dry

65daysofstatic: touring ‘til the tank’s dry

65daysofstatic are about to embark on a journey that they could never have dreamed of taking. From February 9 onwards, right through until March 20 (Wembley Arena!), the Sheffield-based four-piece will be supporting The Cure at arenas around Europe. Quite the something for an already impressive CV.

The Cure dates are divided into two legs – Europe (first) and the US/Canada. Between the two, Paul Wolinski, Rob Jones, Simon Wright and Joe Fro (Shrewsbury) will headline their own UK tour, kicking off in Bristol on April 9. Busy times for busy boys, indeed, so it’s quite amazing that they’ve found time to put together an EP, scheduled for release in April. The Distant and Mechanised Glow of Eastern European Dance Parties EP takes the track of the same name from their last LP, The Destruction Of Small Ideas, and, frankly, messes with it. More from a maker, later.

That maker: Paul Wolinski. DiS gets him on the phone as he’s heading towards a rendezvous with a ferry, bound for Norway. The show on February 9 is at Stockholm’s Hovet. There’s a lot of driving ahead of the band. ‘Til the fuel runs dry, and all that…

You sound like you’ve been rushing about the place a fair bit…
Paul Wolinski: We left literally half an hour ago, off on tour. We’ve got to try to catch the ferry from Newcastle tonight, which gets us to Norway tomorrow so we can drive across. We’re running a bit late. There is a lot of driving hours ahead, but we’re doing it in a bus as it’s too big to do in a van. It’s crazy, man.

I saw the dates on MySpace… they’re frightening. All the way through ‘til June…
It’s kinda five months straight, basically. We get a couple of weeks off, but we’ve our own tour in the middle y’see. But it’s great, we like it.

The fact that you’re supporting The Cure – that’s The Cure – around Europe and the US must be hitting properly home right about now?
Yeah, I mean… I believe it a bit more now that we’re on a bus, moving, but it’s so beyond anything we’ve done before. We dropped all of our equipment off yesterday, with all the production trucks and stuff – Rob went down to London, and he saw them set up their light show and stuff, running through the pre-production. And all of our stuff was piled up in a corner, this tiny dot in a massive warehouse of flight cases. It gives us some sense of the scale of what we’re about to tackle.

That must be quite strange – I’m used to seeing you with loads of gear.
We’re so used to filling venues with far too much stuff, y’know… these tiny venues. And now we’re experiencing the exact reversal of that.

This tour, with The Cure, must be taking you to countries you’ve never played in. Forget the venues themselves – visiting whole new places must be exciting, right?
We’ve never been to Sweden before, so that’s all new, and I’m especially excited about playing in Poland. My grandparents are Polish, but I’ve never been there. I’m really, really quite excited about that. We have two or three dates there, I can’t remember, but we’ve a day off there, too, in the country.

Then you’ve your own headline dates back home to be looking forward to… if you are looking forward to them after such an adventure.
I think it’ll be great. The Cure thing is amazing, but we only get half an hour to plough through a selection of songs to people who don’t know who we are. That’s not the way our live shows have been going – they’ve been going in a different direction, with more electronic things going on. So the headline shows are going to give us an opportunity to push this further, and mix everything up, and to get people dancing. Off the back of this arena tour, we’ll be buzzing to be playing the new sets. The shows might be smaller, but you’re closer to the crowd that way.

Some of the shows are at medium-sized places, but London’s at the IndigO2 Arena…!
I’ve not been there…

It’s pretty big. Someone on the boards said it was around 2,000 people. (2,350 is top capacity, fact fans.)
Bloody hell. It’s kinda scary to think that’s our own show. I don’t want to pass comment on that venue either way, because it’s a mobile phone arena basically, isn’t it?

Sort of, but it was part of the Millennium Dome, right? That’s one way of looking at it, and that’s quite cool. To play the Dome…
I guess there’s something to that, yeah. I dunno… London shows are always scary, the scariest shows of our UK dates. That’s where most of the industry is based, obviously, and I think that’s why our day’s always so full, on the London days. We never get to focus on the show until we’re about to go on stage, and then it’s all a bit of a blur. But yeah, it’s not a bad thing… it just freaks us out a bit sometimes.

You strike me as workaholics – tour, record, tour, record… three full albums already.
We just want to keep going while the opportunity’s there, as who knows when people will get bored of us.

And you’ve the new EP coming soon, too. Tell me a little about that.
Well, have you heard it yet?

Not properly, no – just a brief listen so far.
It’s very different – significantly different – to what we’ve done before. It wasn’t what we expected to end up with. The production of the last album divided opinion massively, and we were revering the fact that we could do this massive electronica single from an album like that, because we can do those sorts of things. We started off thinking we’d do different versions of the same tune, like full-on club versions and really fierce guitar versions; these variations on a theme. But things went in an unexpected direction, about which I’m not going to say too much right now. I’m sure you’ll hear it in due course. I dunno if people will be expecting it.

There’s less of the guitar, then?
You could say that, but you’ll have to wait. I’m sure you’ll be hearing it before long, and it’s setting us up for the April tour. As brilliant as the Cure tour will be, the headline dates are going to see us trying things we’ve never done before. Hopefully we’ll have time to get things right before we start it. It’s ‘new’ old material – ‘revised’ is a good word for it.

No more singles from it?
We’re always wary of releasing singles, as we always want to put something out that’s worthwhile.

I suppose you don’t really need to release a ‘proper’ single these days anyway, certainly not to receive radio play.
I guess not. It seems to be that the whole mechanism is changing really fast now, after years of people saying it would but things not progressing. Nobody seems to really understand where it’s headed; well, I certainly don’t. But this thing, this EP, that we’re putting out: we all consider it new material, even though it’s based on old material. We’re really excited about getting it out, especially as we knew we wouldn’t get the chance to record much with all the Destruction touring, so to have something out is nice. After this touring we’ll be playing festivals – as many as possible, as they’re amazing.

Who knows where this high-profile support touring will take you? Next thing you know Linkin Park will be knocking on your door…
Oh man… didn’t Biffy Clyro just do that tour?

Yep, they supported on the UK dates, at least.
That’s insane…

And you wouldn’t say yes to a band like that?
Oh, I dunno. The thing with The Cure tour, actually, is that it costs an absolute fortune to do a tour like this. We didn’t realise this ‘til we were in the middle of it. Most bands in our position wouldn’t get any fee at all – the label would have to fund it as a PR thing, but our label’s so small and they couldn’t afford that. I don’t know Linkin Park personally, but I don’t imagine they’d be as helpful as The Cure guys. They’ve helped, which is really admirable. I’d like to thin that, if we were ever a huge band, we’d go out of our way to take a really obscure band on tour with us. You’ve got to do that, right?

If you really love them, sure, why not. I guess touring with The Cure might have some of your fans – or followers of more ‘current’ music – finding a new appreciation of Mr Smith and company. Like, he’s suddenly that bit cooler for taking you on tour.
I don’t think we’re very cool though are we? We’re pretty unfashionable these days aren’t we?

It’d be partially biased of me to agree, but I just might. Moving on – you’ve done a number of remixes over the past few years, recently for Emily Haines. (65dos’s version of ‘Reading In Bed’ can be found at Haines’ MySpace, here.) How’d that unlikely pairing come about?
I didn’t know Metric (indie-rock band fronted by Haines), and I heard her solo album first, which is not the sort of thing I’m normally taken by but I thought it was amazing. I don’t play enough piano myself, so I thought it was wicked. We played a festival in San Francisco last year, and Metric were going to be playing, so I remixed that track, ‘Reading In Bed’, and just gave it to her. Luckily she liked it! That track in particular I thought was ace – we only remix things that we think we can remix, and that was a prime candidate. I’d like to do more – we don’t get as many offers as we’d like to tell you the truth. But we do always have that caveat where we’ll only do it if we can make it worthwhile. We keep doing unofficial ones when the mood takes us – we just did a new Britney one. Jo told me to listen to her new single – I still can’t decide if it’s genius or terrible! But we Vocoder’d the Vocoders and ended up with something… well… useless! But it was fun to do.

I’d say your remixes to date all sound very ‘you’, though. They can’t be mistaken for the work of anyone else…
Well, that’s a good thing I guess.

I’d say. Anyway, I’ll let you get on. Laters sir.
Cheers for that Mike, see you later.

65daysofstatic release the Dance Parties EP in April via Monotreme. Their EU/US dates with The Cure can be seen on their website and on MySpace. UK dates in April as follows: