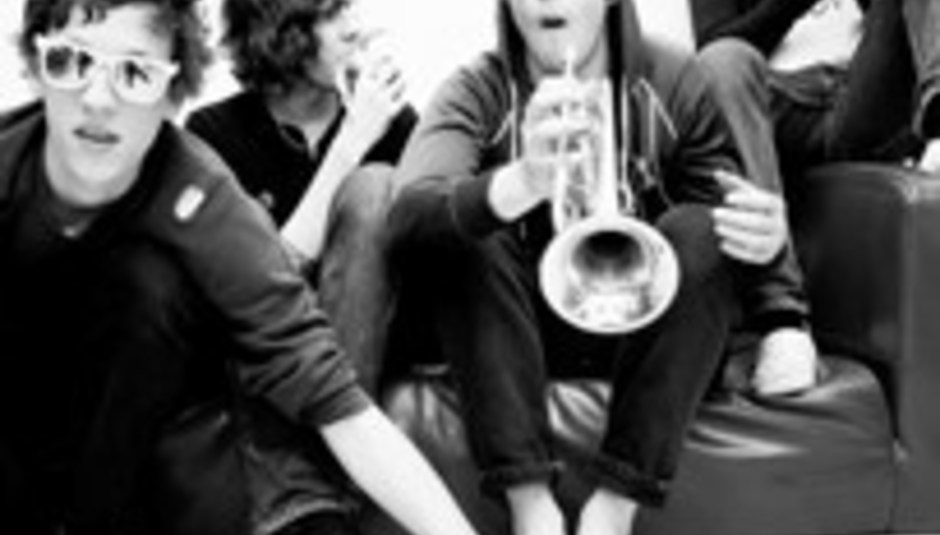 Lovvers: "We play loud, hard and fast, and that’s it"

Lovvers: "We play loud, hard and fast, and that’s it"

No frills, just thrills. Spills? You bring your pint to the front of the crowd at your own risk. Nottingham four-piece Lovvers are a firecracker of a band – on stage they erupt, splintering with all limbs flailing, catharsis via controlled chaos. It’s easy to be frightened, but let these demons infect your senses of an evening and you’ll experience one of the rides of your life. Punk rock should always be like this.

Of course it’s not, though – punk rock in 2007 is closer to the mainstream than it ever has been, with the likes of Gallows breaking through into demographics that skinny kids covered in tattoos had never courted before. And the music is often secondary to the style, to the image of acts plastered across magazine covers. Fall Out Boy can grace the front of serious rock publications and pop rags alike – the boundaries and barriers are blurring, and what a minority once held dear is increasingly encroaching upon audiences who once feared the wares of men blistering vocal chords night in, night out.

But Lovvers are different, and it’s this aspect of their existence that makes them so exciting. The four-piece – Shaun Hencher, Michael Drake, Stephen Rose and Henry Withers – only blinked into life back in May of last year, but since then they’ve dominated stages around the country, overshadowing headliners with their furious flurry of short and sharp punk-rock songs, few of which breach the two-minute mark. Akin to the accessible combustibility of Wives – so sorely missed despite the efforts of No Age – and the bluster of acts past such as Unwound, The Faith and Drive Like Jehu, Lovvers’ material to date has echoed the rawness of their live sets. Two seven-inches in, both released through Jonson Family, and they’re already firm favourites amongst in-the-know sorts orbiting rock circles.

Lovvers are on tour throughout the end of July, and take in a DiS show along the way – the band will headline the July DiScover Club, held in conjunction with Rough Trade Shops, on July 28. The show opens at 4pm and is free-entry to anyone aged 18 or over. Support comes from Herra Hidro and Vessels. For full details, click here.

DiS got Shaun Hencher on the phone as the band travelled from Manchester to Nottingham.

Your live shows can be fairly boisterous, to say the least. Have you ever had anyone leg it out of a venue?
No, I don’t think so. The only reason anyone would leave is because they don’t actually like us. This one time some guy was spitting at me, but he left for a bit only to come back during the next band, get his cock out and throw up all over himself.

That’s fairly nice. But seriously – while you can be fairly intense, it’s not like you’re actually going to smack someone during a show, right?
Oh yes – we’re not into confrontation.

And do you often have people that have never seen you coming up afterwards and saying how much they enjoyed the show?
That does happen sometimes, yeah. We do like to hang around after a set, with the kids that came. But we don’t do this to be congratulated by people, although it’s nice to be liked, obviously.

And what about critics? Do you pay much attention to what people write about the band, either in record reviews or after a show?
No, not really. Like, when we got one out of ten in Rock Sound, when Billy Talent got nine or something… I’m sure we deserved one, and they warranted nine. The band that scored us one out of ten, though (The Ghost Of A Thousand, since you didn’t ask)… I expect we’ll end up playing with them sometime, and then we can hold up scorecards after each of their songs. Like they’re Torvill and Dean or something.

And the seven-inches you have put out so far, the self-titled and Near Enough For Jazz… do they serve as flyers, almost, for the band’s live shows?
I guess they do, as they were recorded live anyway. We want to keep releasing singles in this way, though – it keeps the momentum going, and there are no delays as we’re waiting for an album, or whatever. Releasing seven-inches keeps it exciting, for us. We can put out a lot of different releases, as we’re always trying to write and record. That means that people always have something to check out, and they can get to know our songs. I don’t think there are a lot of bands with a lot of things coming out… bands are mainly made to put out albums, which takes a lot of waiting.

So how does it work, then? Are you recording songs and then offering them to Jonson Family?
Yes, basically. We’ve never actually met the people at Jonson Family, but they were the first label to express any interest in us and the relationship works really well. We swap e-mails and we send them songs, but we never really ever properly speak to them! They’re really cool and nice. No other labels have really expressed all that much interest in us, at least not from what I know.

So when an album’s ready – which I assume it will be eventually – will you shop it around at all?
Well, we want a record rather than just a collection of songs. For now, the seven-inches are great, as they appeal to people with short attention spans. A record would take a lot longer to pull together, so obviously we would like to put it out through a label we respected, and who could look after it properly. If I were to dream it’d be on something like Sub Pop, but until that happens we’re just going to keep playing. We’ve a few things in the pipeline that we’re looking forward to.

It seems strange in this day and age to be prioritising the release of physical singles over anything else… but it is refreshing.
We’re not like a typical band – we’re not stylised and we’re just being honest, putting a lot of ourselves into our music and then putting it out there. It’s like walking into a comic shop – you go in to pick up something by your favourite writer, and then a few weeks later you return to get the next one, and so on… there’s always something there. We like to be constantly on the move.

So what’s your take on a band like Gallows breaking into the mainstream?
I don’t know, personally. I mean, they’ve a lot of money behind them. Were they big before they got picked up by a major? I don’t know. We got asked a question like this before, actually, and we just said that Gallows are a bit like Coke Zero: it’s everywhere, and loads of people will try it but not everyone will like it, and it almost certainly won’t be around forever. They were supposed to play with us at an all-dayer a year or so ago, but I’ve never actually met them. I think their music is more metal than punk or hardcore, at heart. I dunno… It’s argy bargy meets JR Ewing or something. That’s nothing that really interests me or anyone in our band.

Have they set any sort of precedent, though? Music that is fast, and raw, can be accepted by mainstream media like NME…
Errr… well, we have no such aspirations for this band. We got asked the other day if there are any other British bands that we aspire to be like, and I don’t think there have been all that many inspirational British bands of late. We have friends – like Blood Red Shoes for example – who are in different-sounding bands, but they’re often coming from similar roots. We’ve built a group of friends, some of whom are in bands, and we’ve kept them close. We call around when we’re booking a tour and they help us out, putting us on or letting us crash. I think that’s why, too, we play so many different types of show. I also never get caught up with who we’re actually playing with – sometimes it is nice, though, to play with a band that we really love, and that doesn’t necessarily mean because we’re well into the music. We love Beestung Lips, but that’s because we all get on with them as we’ve known them for years, before their band even existed. I used to buy records off their bass player when I was 16, and now I’m 24 and it’s cool to play with these bands and hang out, have a beer and stuff. I mean, who would you say is the ‘most inspiring’ British band of the last two years?

Me? I couldn’t pick one out of the hat…
Exactly. It’s just as hard for me. When we started the band, a lot of people were saying a lot of things about the band that didn’t really make sense. I just think we’re trying to be honest, and straight up. We play loud, hard and fast, and that’s just how it is. It’s honest music. We don’t have fashion shoots or whatever. There’s no agenda, particularly, to what we do.

And how have these July dates been so far?
They’ve all been great. We book the shows ourselves, and we have our own van, so we just travel from town to town. We play our music, hang out, chat to kids, hopefully have a floor to crash on, maybe get something to eat… it’s all good.

Lovvers’ latest seven-inch, ‘Near Enough For Jazz’, is available to purchase now via the Jonson Family website. Click here to order, or wait ‘til August for it to hit stores. The band’s MySpace can be found here, and their forthcoming live dates are as follows: