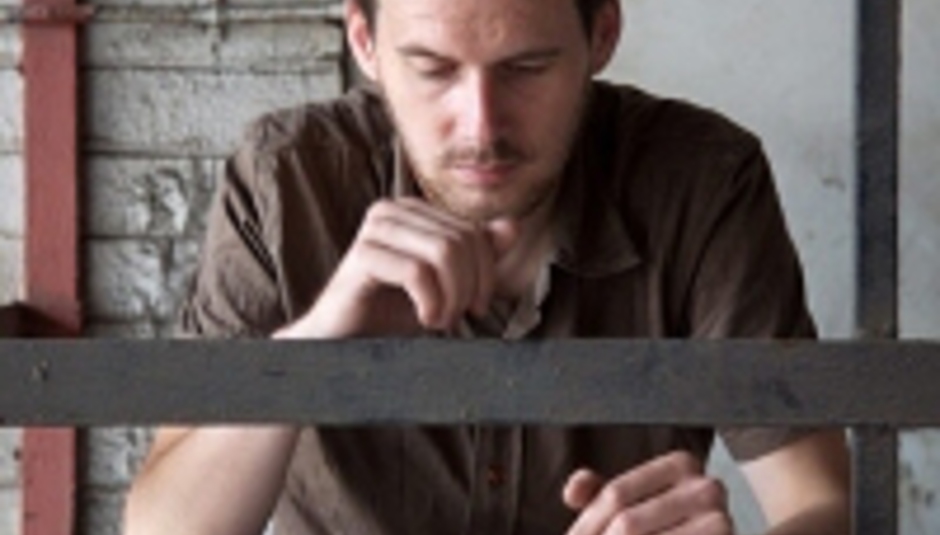 Chris Clark, currently known to record-buyers by simply his surname, is enjoying a Guinness with DiS around the corner from this here website’s headquarters. In just over half an hour he’s a train to catch, up to Scotland; reasons are personal, and we don’t probe the architect of last year’s hugely acclaimed Body Riddle album for information unnecessary for the feature at hand. We are, genuinely, enthralled by Body Riddle, and simply wish to pick the brain of its maker for clues as to its genesis, and where his path’s heading in the immediate future.

Body Riddle, released by Warp at the end of 2006, was awarded a 9/10 score here; since the release of the follow-up to long-player previous Empty The Bones Of You (released in 2003, also via Warp), Clark has let loose the six-track Ted EP. It is reviewed here, and its freakish, insect-starring video can be seen here.

Later this month Clark will support Battles on a number of dates, click here to see which ones, or scroll to the interview’s end.

Tell us about your most recent release, the Ted EP.
The Ted EP is, basically, ‘Ted’ from Body Riddle with a Bibio remix and four new songs. It was pretty long at first, but we condensed it down – it’s sort of the conclusion to the album, in a way. It’s like a companion piece. There was an EP with some copies of the album, which is great ‘cause it sort of bypasses the whole marketing thing. It’s pretty satisfying when people say to me that I’ve only released this short album in three years, but there’s all this other stuff out there if people look hard enough. It’s really ace dishing stuff out for free. I’m going to release more dance stuff this year, and loads of remixes… of other people’s stuff, sort of club orientated. I do get a lot of remix offers. There’s a lot in the pipeline – a lot of people have got in touch with me through MySpace. I do run my own MySpace page – it’s a bit like mobile phones in so much as everyone complains about it, but everyone has one.

So you’re in demand for remixing – does that not get in the way of your own material?
Doing a good remix is really satisfying, although it can totally distract me from my own material. It’s a conundrum – and I shouldn’t say this, but it is pretty honest – because you want to make a good remix, but if it becomes too good you want it for yourself, so you end up taking all the parts that aren’t yours out and making it into your own track. That does happen, sometimes, and then I don’t do the remix; I also just knock some out, sometimes. You do need the cash in your pocket.

On paper it looks like you have been quiet over the past three years, but that couldn’t be further from the truth, right?
I was really busy over the last three years, between albums. I played loads of live shows, playing material that wasn’t on the last album, so I built up a body of work that exists separately from this new album. Body Riddle is, almost, just one track. The idea of just doing one album – eleven tracks – in three years is ridiculous. I don’t know if I ever get stuck, creativity wise – that’s the easy part, in a way, and I always know when a track is done. With the Body Riddle tracks, I let them all grow until they were done; one took a whole year to write. I’m just not up for forcing anything – as soon as I feel I’m stuck and can’t go any further with something, I’ll just do something totally different. I don’t scrap too much, but I do put it to one side – it can take a while for you to realise if something’s a good idea or not, but then again you can also do something very quickly. I wouldn’t like to say that I wrote in one particular way, as I think the tracks on Body Riddle are quite long-lasting. I’ve listened to them hundreds of times, but there is something satisfying about writing music and not giving a shit how it’s going to sound in two years. There has to be a balance – if you get stuck making music that’s the most precious material ever, I think it’s a cul-de-sac.

So you think Body Riddle is an album that’ll continue to pick up fans over the years? It’s not a quick-fix record, something that’ll pass from fashion…
Body Riddle has longevity, to me. I went back to it, obsessively, after it was finished. I do listen to my own music – I’m pretty resilient to the urge to want to change things, and I can always alter things live. It’s the most amazing thing, watching a track grow – they just sort of build themselves, really. All you do is guide parts to where they need to be, and when it’s finished it’s an instinctive thing. Quite often there will just be these little phrases going around my head for months and months and months… but then there’s stuff I forget about. I’ll put it on an iPod or something, but then forget I’ve written it. That’s a strange thing, and I forget where I was when I wrote it, but after a while it can serve as a really sweet reminder.

Do you think your music best affects the head or the heart, then? It seems to resonate, emotionally, with some listeners…
I think the music can connect with emotions – I still think of what I do as being song-based, too; they’ve always fitted a snappy formula, so I find it weird when people think it’s proggy, or that it’s difficult. I’m massively into some prog bands. Yes have done some amazing things – ‘Heart Of The Sunrise’ is amazing. It does go all over the place, and sags at the end… but I don’t know what there is that you can’t like about them. How can you not like them? It’s like, how can you not like cats? What’s not to like about cats?

So it shouldn’t be categorised as IDM, then?
The phrase IDM is awful. It implies this condescending intelligence, and when you listen to it, sure it’s complex, but to make complex music with machines is actually pretty easy. It’s the mastering of technology rather than the mastering of music. Someone like Daft Punk isn’t to be sniffed at – there’s nothing complex about what they’re doing, but I am really into that. I’ve gone through the complex beat patterns, and now I am going back to something more primitive. The different is probably noticeable.

Likewise, critics pointed out a significant stylistic progression from your last LP to Body Riddle…
I wasn’t really aware of how I’d progressed from album to album – I can’t really get a perspective on it. I think you have to be open, and allow yourself to contradict what you’ve done before. You need to let a degree of doubt to creep in. I’d rather watch someone totally going off on it, and I think one of the most amazing people in that respect, and this might be a bit of a cliché, is John Cale. I’m not really into the poppy stuff, but that is so pop, but the drone stuff drifts in and it’s, like, ‘Where is this guy at?’ I’m massively into stuff like that. Radiohead’s Kid A I didn’t think was an electronic album – I heard it as a really good pop record. I’ve not heard Thom’s solo album enough to form an opinion on it. I don’t feel that it’s over ambitious, or over confident, to say that I could bring something fresh to what he is doing, or maybe collaborate in some way! It’s amazing… what I find fascinating in music is when something’s really pop-based, but has all these avant-garde ideas, too. Like the new Clipse record – it’s just fucking unreal, compared to all the underground hip-hop that’s come out over the past few years. I think pop… I think the beat patterns on the Clipse record are so wrong, so fucked, and that loads of people are going to hear it, that’s exciting. When the avant-garde meets pop, that’s a fascinating area. I’ve been going on about that album for ages.

A misconception about hip-hop and electronic artists is that they can DJ – El-P recently told me he can’t too well… what about you?
I’d really like to do more DJing, but it’d be pretty messy. I definitely favour the slap-bang approach – there are no extended scratch solos! I’d like to get some more offers to do it.

Finally, what acts should readers getting into Body Riddle be keeping their ears open for?
I’ve become really good mates with Bibio – it’s, like, a fishing fly, and all his stuff is properly amazing. It’s underrated, saturated guitar music, and it’s really influenced me. His next album is going to be amazing. He’s from Wolverhampton, and we’re going to be collaborating. I always just end up name checking my mates, who make music that’s amazing. Do you know Friendly Fires? I’m friends with the bassist in that band, Rob Lee. He’s a man of many talents – he’s probably the tightest drummer in the world, ever. I like the guy in Battles, too. Rob Lee, though – the point where everyone thinks something’s tight, Rob’s got a few more microscopes, involving milliseconds… milliseconds divided into tenths. He has a really good feel, and doesn’t put a beat wrong. A drummer can make a band – if Can didn’t have Jaki Leibezeit, they’d probably be a bit wispy. I could just listen to their drum tracks and get 90 per cent of what I get out of the whole band.

Check Chris out on MySpace, here.