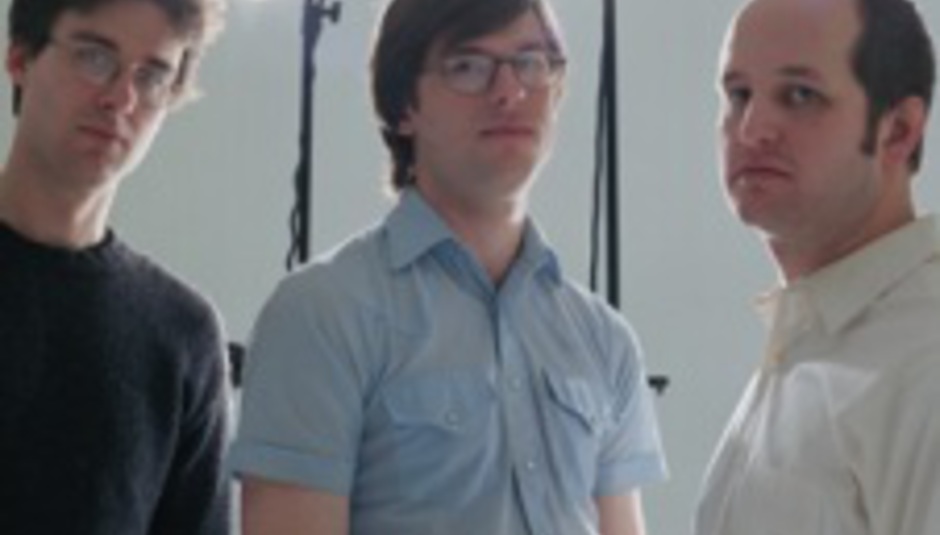 Brooklyn-based outfit Oneida aren’t slouches when it comes to output: the band – recently expanded to a four-piece for their latest LP, Happy New Year – have released no fewer than eight studio albums since 1997; alongside these long-players, they’ve unleashed upon open-minded ears a slew of singles and EPs, including a split with Liars, Atheists, Reconsider, back in 2002. In certain circles they’re megastars, the ultimate purveyors of awkward art-rock that so-often defies simple categorisation; so far as commercial success goes, though, the band remain on one of the ladder’s bottom-most rungs.

The band is comprised of Kid Millions on drums and vocals; Bobby Matador on organ and vocals; Hanoi Jane on guitar and bass; and Double Rainbow on guitar. It’s entirely conceivable that you already know Mr Rainbow through his work with Trans Am and The Fucking Champs, for he is none other than Phil Manley.

Alongside their hectic touring and recording schedule, members of Oneida also find time to run Brah Records, a subsidiary of Jagjaguwar. Combining elements of Krautrock and psychedelica, the band’s core compositional components can be traced back through musical history to key mavericks; however, the manner in which these ingredients are mixed ensures that Oneida are unlikely to be regarded as copycats any time soon. They remain, well into their career, a powerful force of inventiveness.

DiS caught up with Kid Millions shortly after the release of Happy New Year, reviewed here, to talk productivity, artistic influences and the environment of Brooklyn, New York City.

You’ve been making music as Oneida now for some ten years – were there ever moments in that time where you thought, “Hey, we should have ‘crossed over’ by now”, or something? If the band had blown up, big time, would you have really been able to make the wonderfully haphazard music you do today? There can’t be many artists able to make a coherent but stylistically disparate album like Happy New Year with such apparent ease…?
I don’t think I’ve ever thought we should have ‘crossed over’ – maybe early on when I was convinced we were the best band in the world and it was a battle royale every night… now I understand why we aren’t really appealing in a mass market kind of way. For one, we’re not the greatest singers – and I wish I could be better – but we do our best at that.
I just don’t think we are a likely band to blow up… we aren’t scary people, we aren’t larger than life – well, maybe Bobby on a bender – and we do whatever we want, which tends to be uncalculated. Maybe the music just can’t appeal to the dance floor… but I’m still a big Oneida fan. I think we’re a great band – sometimes I wish people could see what we’ve accomplished more… but those thoughts are seldom. I don’t want to give them too much play. It’s not really how the band works in my mind.

Are there elements of Happy New Year that exist solely because of the input of Phil Manly?
Phil was around during some of the sessions, he contributed some guitar and some vocals but this record is mainly the result of the original trio. But having him around was essential to the process. We don’t think of ‘solely’ with Oneida – it’s never quite been that way for us. It’s a very collective band.

Your production rate seems particularly high by today’s standards, i.e. you’re not releasing an album every two years on average. Do you think other acts are lazy, or that you simply have more commitment to writing and releasing material than many an act? Just how much of your day is consumed by thinking about and physically writing new music?
I think we don’t produce a whole lot of music – right now things are a little slower. If you’re serious about writing songs, you should make it a craft and work a little bit everyday. That’s my philosophy but not my practice, so I’m a little disappointed in my discipline. It’s great to keep a release schedule that’s kind of on pace with our creative process… that’s very healthy. One thing to remember is that a lot of bands tour more than we do – it’s hard to write material on the road. Zeppelin did it I guess. We all have jobs – this isn’t our full-time life – so in that sense I think what we’ve accomplished over the last eight years is great. I guess Acid Mothers Temple shit it out much faster than we do… we’re not like that.
I try to play music a little every day – I don’t really reach that. I think Bobby works more on writing than the rest of us right now. It ebbs and flows.

Since your output is so high, you must go through a plethora of influences? Were any of the albums born from any key experiences, or influences? Do you find yourself hearing things in other musicians’ work and wanting to modify it, twist it and make it your own? Or do you consider yourself workers within a bubble, unaffected by the work of peers and friends and enemies and unknowns…?
Heh, funny question. This gets to the heart of my writing process. When I hear something I like, I tend to want to try something like it – that’s happened with Main, Radiohead, Amon Duul, The Wipers, African Kora music, and a host of different stuff. I like trying new stuff out and seeing what I can make of it because I’m not a very good parrot – so things tend to come out sounding like Oneida. We are absolutely not in a bubble! We are big music consumers – probably that’s no surprise to people. We are very affected by peers, friends, and artists old and new. There’s always something amazing to hear.

Happy New Year is accompanied by a neat press release summarising it as “the most eclectic and most coherent album” you’ve released yet. Do you feel that way about it? How do you assess each album: is every next album’s gestation punctuated by criticism of its preceding album, or does every new album see the band starting from scratch, switching off from what came before?
We wrote the press release so we did feel that about the record. When I listened back to the mixes I thought it was our best record overall. Who knows? I think bands, if they are serious about what they do, might feel that way about each new release. We probably can’t just switch off and start from scratch – that isn’t the way we work. We could certainly try it sometime as a jumping off point, but no – we’re working with three instruments, the three dudes in the band! So that’s how we get where we get.
Happy New Year kind of emerged from a strange place – it started as a triple-album called Thank Your Parents, which became impossible to finish for us. We wanted to try to salvage [something from] what had been for me, at least, a difficult process. We were able to do that I think. It was a gratifying experience – we worked hard at it and saw some great results.

Do you feel that many of your songs are products of the environment they were created in? If Oneida lived in a place other than Brooklyn, would Oneida sound like the Oneida we know? Have you ever considered moving away from the area? Does being a ‘New York band’ ever work against you? A few years ago there was the whole garage-rock bubble that seemed to pigeonhole any band from the Five Boroughs as a bloody retro-rock act…
Probably we take a lot of cues from our environment. I think that’s why we seem ambitious to people outside of here – we’re always working, and we don’t want to stop – but it’s because we’re in NYC and that’s the way all our friends and artists are. People are f’in serious here! Brooklyn and NYC in general are very tough places to live – they are expensive, harsh environments that I’ve developed a love/hate relationship with. I find it hard to imagine leaving the city but there’s probably not a day when I don’t imagine living somewhere else – anywhere else!
The NYC band question is funny – I’ve told this story a lot over the years BUT, anyway… When we started in 1997, telling people that we were a band from Brooklyn was actually considered perverse. We’d say, “Yeah, we’re from Brooklyn,” and people would kind of be like, “HUH??”. Things changed very fast, of course, and it became a hip place to be from… but in the first few years NO ONE was a Brooklyn band. At least that was our impression. We thought it was funny and REAL to just say, “Yeah, we’re from Brooklyn, NY”.
Has it worked against us? Probably not, right? We probably get a few more listens because of our associations with our more successful brothers and sisters from here… so I don’t know. At one point we were half-worried that people would discard us when the Brooklyn fad died off – but to be honest we were kind of ignored during that frenzy!

How important are visuals to you? Each album has a very particular stylistic approach, graphically – are you in control of this aspect throughout, or do you have many friends willing and able to contribute interesting artwork come each release?
We work closely with artist friends to get the visual stuff down. They surprise us a lot of course – I don’t want to get credit for their art – but we do contribute ideas and probably water shit down in the process!

Are there any places you’ve not yet been, or experiences you’ve not yet had, that you’re keen to have come your way before Oneida ends, whenever that may be? Do you think you’ve had a good career, so far – travel, friends found far and wide, great bands you’ve been able to play with? What does the future, immediate or otherwise, hold for the band?
Oh man, my life has been infinitely enriched by being in this band! I’ve met so many people around the world, made so many good friends, made so many connections… it’s a gift! Just so special – I’ve been blessed. Of course there are places we’d love to visit – Japan, Australia, New Zealand, South America… the northern territories in Canada. It’s been amazing – I hope we can continue to grow together as people and keep this part of our lives healthy… it’s been nothing but positives!

Happy New Year is out now on Jagjaguwar/Rough Trade. For more information and tour dates, visit their website, here.