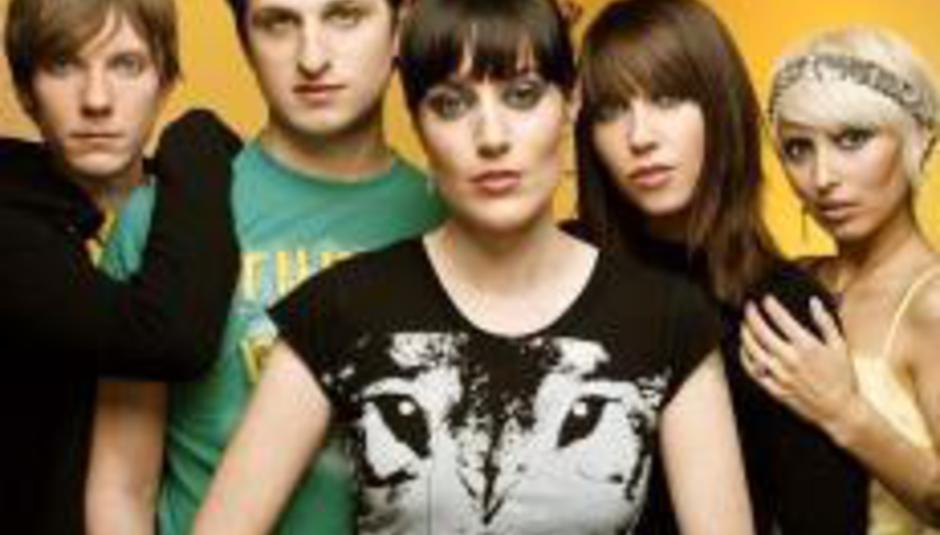 Tilly and the Wall: "We’re not making shit up to be cool"

Tilly and the Wall: "We’re not making shit up to be cool"

Tilly and the Wall are at sixes and sevens, spread around London’s Luminaire venue in vary states of dishevelled indifference and illness. Time’s ticking and they’ve still not soundchecked, two of the five are under the weather, and there’s a pesky journalist surveying the scene impatiently awaiting his 5.45 with the band.

Still, no soul can stay irate at the top-popping Omaha quintet for long – while Tilly and the Wall’s schedule is a tight one, and one already suffering a number of unexpected disruptions, the sole member that finally sits down with DiS is amiable in the extreme. In the (larger) pub below tonight’s venue, singer Neely Jenkins sits opposite DiS beaming broadly, her against-all-odds optimism infectious. We’re won over almost instantaneously; she’s been touring the UK for three weeks but displays no signs of tiredness.

Your new record, Bottoms Of Barrels, isn’t officially available in the UK as yet. Have the new songs been well received at your shows over these last three weeks?
I’ve been surprised – there have been a lot of people that know the words to the new songs already. I think it’s awesome that they know it already – I’m still surprised that anyone even comes to our shows, y’know! When we first came overseas we were warned: get ready to play for no one. But it’s never been like that – the shows have been really good.

And why has there been a delay between the US release of Bottoms Of Barrels (Tilly and the Wall’s second album was released across the pond in May) and its official release here (through Moshi Moshi)?
We didn’t have a UK label until after Wild Like Children (the band’s debut), which had only just been released here. It’d have been weird to put out another CD right away. It made more sense to wait a while.

You’ve hardly had any time off during your time here, it seems – you’ve done a fair few festivals too, right?
We did some, which were really good. We’ve never done anything like that before. We did Electric Picnic, and Indian Summer in Glasgow, and we played in Dorset yesterday… yeah, the End of the Road Festival. There were random peacocks everywhere – it was a lot of fun. We did Bestival, too.

Doesn’t your hectic schedule leave you a little worn out? There must be times when you really can’t face being all smiley and upbeat on stage of an evening…
We have been very lucky. Whenever we are tired, and get on stage, there’s just something… I’m sure it comes from each other, and the audience as well, but something just reenergizes us, y’know? There have been times when we’ve been really sick, and we’ve still got up there and had an awesome time. There have been a couple of times – maybe two shows in my life – when I was like, ‘I’m too tired’. But other than that, there’s a surge of energy. It’s really weird, and I love it.

Does the greatest toll from touring fall upon Jamie? She must burn up the most energy, surely, since she tap-dances her way through so many shows…
We usually figure out our set from what Jamie can do, since she’s the tap-dancer and she does use so much energy. When we make a set-list, we look at the songs and work out how much she’s going to need to dance. If she’s been working really hard for a few songs, we’ll give her a break. We’ve played some extremely hot clubs before and got through them.

Do you think that people still see ‘the tap-dancing as percussion’ thing as a novelty, something to set you apart from the indie-pop crowd?
A lot of people probably look at us like that, and that’s fine. On this new record we have live drums, though, and on our next tour we’ll have a drummer as well. So I think it’s a growing process: we started off pretty… oh what’s the word… y’know, with not so many instruments, and progressively we’ve added more. It’s a process.

So the tap-dancing thing developed naturally?
We’re not trying to impress anyone – everything’s been organic. We had a band before, and Jamie would just tap-dance as extra percussion, but when we were talking about working in a new band, she said that she would tap-dance, and then we’d find a drummer. But we never did. People can think whatever they want about us, and that’s fine, but we are who we are. We’re not making shit up to be cool; we love playing music and doing what we’re doing. We’ve been so lucky with all the opportunities that we’ve had.

And do you think further opportunities will present themselves? Can you hear genuine pop-chart potential in your songs?
I don’t know… we’ve never even thought about that. We’re on college radio back home – we’re played a lot on that. I think it would be really weird to turn on the radio and hear one of our songs, y’know, on a commercial station. We get compared to a lot of older bands, like The Mamas & the Papas. But I don’t know… I’ve never really thought about it.

Tilly and the Wall’s Bottoms Of Barrels is officially released in the UK on October 2 through Moshi Moshi Records – click here to visit the label’s website.