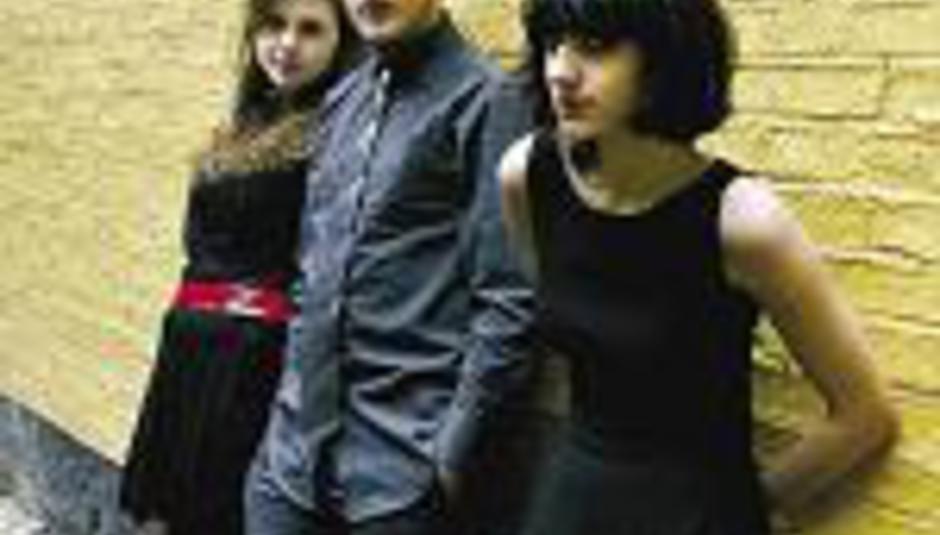 The Victorian English Gentlemen’s Club have just released their eponymous debut album on Fantastic Plastic. Which is quite apt, really, as it is a quite fantastic piece of plastic: dark, jagged, edgy, tuneful and seething with warped energy, the more one listens to it the more compulsive it becomes. The three-piece (Adam on guitar and vocals, Louise on bass and vocals and Emma on drums and – you guessed it – vocals) are about to go on tour (with some quite marvellous supports, by the way) and are generally looking to make their presence felt. So now seems a good time to ask them to tell you why you ought to go along and listen in...

So, tell us a bit about how you got together and what you’ve been up to lately...
Emma: We met a few years ago - at art school, we’re very sorry to say - and decided to start a band! Adam came up with the name.
Adam: Yeah, I was doing a mural at art school and one of the teachers said it looked like some kind of Victorian English Gentlemen’s Club. We like the fact that it’s a really long, awkward name – not just 'The something' or 'The Blah Blah Blahs'. It’s hard to remember, but also kinda hard to forget! Like, once people have seen it a couple of times it’ll stick in their heads.
Emma: And we got signed to Fantastic Plastic about a year ago – and we’ve got our album out on Monday! (Said self-titled album came out on August 28.) Which is very exciting, ’cause it’s our first album.

The album, and indeed everything you’ve released, has really surreal, individual and kind of freaky art work – do you feel artwork’s important?
Emma: Totally. We do the artwork ourselves, and we think it’s very much a part of the band. We want to try and have complete control over our image – it’s part of our identity, and we wouldn’t want some big graphics company coming along and saying, “You’ve got to have this image”. We’re kind of control freaks over it!

What else makes the album stand out?
Louise: Well, we don’t think it sounds like much else around at the moment: it’s quite a sparse sound, with lots of space between the different parts…
Adam: …But it’s quite hooky as well – not experimental free-jazz noise, or anything like that!
Emma: We recorded it with Gareth Parton, who did The Go! Team and The Pipettes - we’re quite a dark band, and he helped us get to our poppy side.
Louise: Also, we don’t think about the same subjects that a lot of other bands do – our album doesn’t have any songs about love.

Did you set out to be sparse and awkwardly unique – or did it just turn out that way?
Emma: Well, we don’t go out of our way to write songs about certain things – but then, we are adamant that we don’t want to write songs about people just getting drunk, getting off with girls. We’d rather write about things which’re more interesting to us. Like on the album, there’s a song called 'Under the Yews' and that song is about a dream Adam had.
Adam: It was about what happens to stillborn babies – whether they bury them. And I asked everyone, and no one knew the answer.
Louise: And then there’s 'My Son Spells Backwards', and that song’s about dyslexia – the number of people who were dyslexic in our art school.
Adam: Like, if you’re dyslexic you get a load of free equipment, including a laptop computer – and there was a spate of people who were getting hungover to sit the dyslexia test, in order to get hold of a free computer. It seemed like half our year was dyslexic…
Emma: And there’s our single, which is out on September 25th – it’s called 'Impossible Sightings Over Shelton'.
Adam: That comes from when I used to work in a mental hospital, cleaning.
Emma: We’ve had people thinking it’s about a UFO sighting but it’s not; it’s about the people in the home looking out, because they used to spend ages looking out of the windows.

So what comes first – the songs or the words?
Louise: Oh songs, definitely.
Adam: Music always comes first, and we just kind of hum over it.
Emma Words are quite important, but we’re not really a lyrics band. And we’re not a political band, either – we think that if you’ve got a political statement, something to say, then you should go into politics! Being in a band doesn’t give you a better opinion than anyone else, and we don’t want to go round telling people what to do.

Intrigued? Well, the band have a tour coming up and an album out now, both of which you could (and should) check out in the immediate future… Or, you could just go to their website right this instant, and then download some songs and watch their rather mighty video.